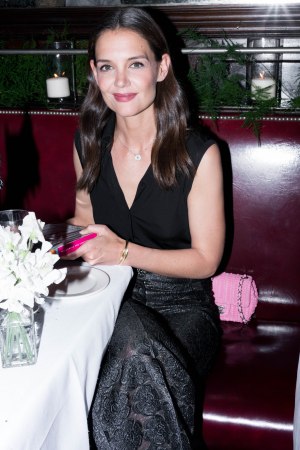 “Balthazar? It’s filled, you know, with actresses tonight,” cautioned an Uber driver bound for the SoHo restaurant, believing he was delivering some sort of PSA. That was rather the point of the evening, as Chanel took over the downtown institution — and a chunk of Spring Street with it — for its annual Tribeca Film Festival artists dinner on Monday. The only way into the restaurant was through the bulb-popping, botany-lined step-and-repeat, which should have further hinted at the crowd expected.

The evening was in honor — according to press notes, at least — of several artists who contributed original pieces to the festival’s filmmakers, though they were all reluctant to speak to reporters (offering booze consumption as a defense). Keith Edmier, Zak Kitnick, Virginia Overton and Alex Gartenfeld were among those toasted, and as in years past, guests were sent home with a mix of art books, leading the painterly of the bunch to linger past profiteroles in hopes of snagging some discarded tomes.

“Dude, life got crazy,” said “The Witch” actress Taylor-Joy, reminiscing on life since last year’s Chanel dinner. “Really crazy, really intense. But the best part is lots of work. I’m shooting a movie in New York right now, then a movie in Boston then in Spain.”

“I came once like a few years ago when I was a judge [in the Tribeca Film Festival],” Sobieski said of her Chanel dinner track record. “There are a lot of familiar people that I know who were throwing it and so I came. Also all the ladies look lovely.”

The clothing opp was enough to garner some RSVPs. “I was going to cancel,” a tweed-clad woman confessed to her seatmate. “But it’s Chanel, so you can’t.”