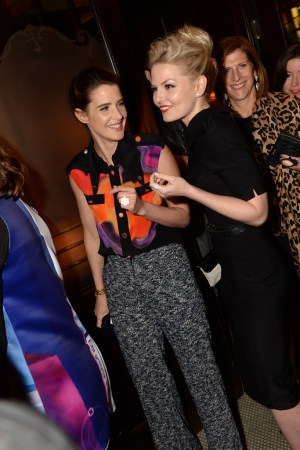 Everything Chanel does comes with at least a touch of spectacle. Such was the case on Monday night, where a particularly touristy tract of New York’s SoHo was blocked off by metal barricades and a fleet of NYPD officers.

No, Obama wasn’t in town. It wasn’t even for Karl. It was for the brand’s annual TFF Artists Dinner, thrown to support the Tribeca Film Festival and celebrate the artists of this year and years past. At least, that’s what the press release said. But the crowd who gathered at Balthazar skewed much more fashion-focused than film-focused.

Then there was Denis Leary. For those who work the merry-go-round of fashion parties, it was a happily strange sighting, a break from the same 30 to 40 people who go to these things. So what the hell was he doing there? Does he have a movie at the festival? “No, no. I’m here to support Bob,” he said, cradling a glass of wine. “I came last year, too. Last year, Sophia Loren was supposed to be here and I’d never seen her, so that was the main reason I went. I mean, she’s f–king Sophia Loren.”

Loren herself didn’t make it this go-around. The biggest star to turn up this time was Robert De Niro himself, lord of the festival and probably the only person in the room to have seen any of its films. Though it was more than an hour past the scheduled dinner seating, De Niro hadn’t yet arrived, meaning cocktail was not over. Lindsey Wixson spent much of the cocktail off in a corner, polishing off a tray goat cheese tarts to the chagrin of every woman in her vicinity, most wearing Spanx under their dresses. Dustin Yellin was the conversation starter. The artist wandered around aimlessly with a leafy sprig dangling out of his mouth, occasionally taking it out and shaking it at people, mumbling something about “blessing” guests.

“Are these decorative?” Anya Taylor-Joy asked tablemates once De Niro had arrived and it was OK to sit. She was holding up the Kiki Smith tome placed on her dinner seat, looking over it appraisingly. The actress was clearly a newbie to the dinner (they gift art books every year, leaving them on guests’ dinner seats). “Yeah, yeah, give it to me,” Heidi Mount, across the table, piped in. “I’ll pile them up here next to me,” she said, collecting the book. “I’m hoarding them for myself,” she whispered to her neighbor with a wink.

After the steak frite was cleared, dessert (indiscernible cakey things) was served and guests began to filter out. It was then that people began to notice who hadn’t bothered to show up at all — Binx Walton and a few other of-the-moment models. The main conspiracy theory involved the date, 4/20. “No, no,” one guest refuted, waving their icing-covered utensil. “I’ve gotten a bunch of Snapchats from Binx. They’re not smoking. They’ve just been drinking since, like, 9 a.m. for some reason.”