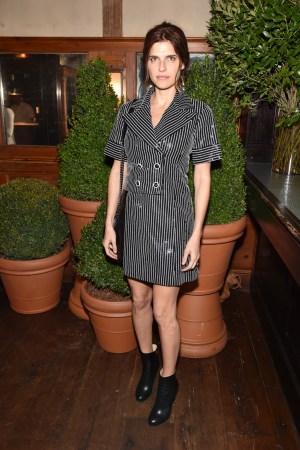 On Monday afternoon, Locanda Verde was hosting a power lunch.

It was the official beginning of TriBeCa Enterprises’ new initiative with Chanel, “Through Her Lens: The TriBeca Chanel Women’s Filmmaker Program,” and a crowd of heavy hitters had come out for the project, which supports emerging U.S.-based women writers and directors of short-form narrative films.

In keeping with the initiative, it was a female-centric bunch, with attendees including Lake Bell, Emily Mortimer, Jemima Kirke, Meg Ryan, Patricia Clarkson, Laurie Anderson, Rose McGowan and Mickey Sumner.

Olivia Wilde was fresh off promotional duty for her film “Meadowland,” making for perfect prep for the luncheon, given that it both premiered at the TriBeCa Film Festival and was helmed by a female director, Reed Morano. “I like working with great directors, and I think there are a lot great women who are directors and haven’t had the chance to flex their muscles,” she said. “They need studios and financing companies to facilitate their films. I think it’s extremely important to continue speaking up about how there is a demand by audience members and a demand by actors to work with and see films by women directors. That all trickles back to the people with the money — they are the ones who decide what film gets made.”

Toward the front bar, Katie Holmes mused on the industry as she surveyed the crowded room. “It’s important to celebrate everybody who is working behind and in front of the lens,” she said. “I’m always very excited for people who want to tell stories and tell them in new and different ways.”

As part of “Through Her Lens,” female filmmakers are given mentorship from established members of the industry. Holmes noted that one of her own mentors was in the room. “Jane Rosenthal has helped me tremendously,” she said. “She’s been amazing to me.”

Before a spread of steak, tagliatelle pasta and roasted cauliflower descended upon the room, Rosenthal addressed the group, commending their collective promptness. “They said if you want to start a lunch on time, invite a bunch of busy women,” she said. “We will all be making our afternoon meetings.”

Even so, most attendees had had the right mind push back their midday engagements, with both Wilde and Holmes still deep in conversation well past when the chocolate torte had been served.