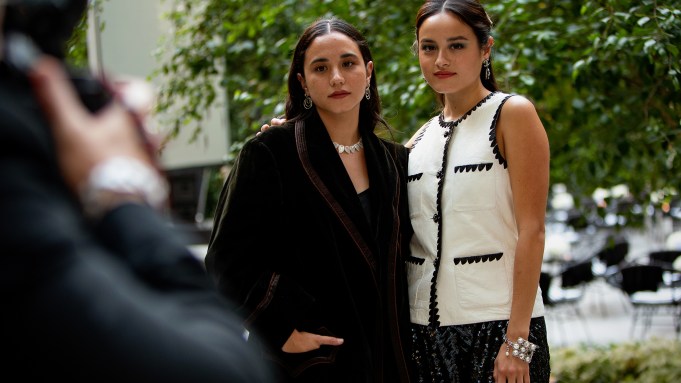 Those who pondered if virtual events might be here to stay are informed that it’s quite the opposite: You may never log onto a Zoom cocktail again. With New York’s vaccination rates climbing and a stretch of nice early summer weather hitting the city, the social scene is making up for lost time with parties galore. On Thursday, Chanel threw a cocktail party and screening as part of its ongoing relationship with the Tribeca Festival — dropping the “Film” from the name this year — in the garden at MoMA. Julian Schnabel played host, showing his film “Basquiat,” which celebrates its 25th anniversary in 2021.

Katie Holmes, Chase Sui Wonders, Delroy Lindo, Coco Baudelle, Dree Hemingway, Theo Wenner, Olivier Sarkozy, Vito Schnabel, Hailey Gates, Kate Young, Jane Rosenthal, Sarah Hoover and Michael Avedon were in attendance, after showing proof of vaccination and identification at the entrance and then mingling for drinks and snacks while it was still light before the screening.

“It’s my first event,” Hemingway said, naturally dressing in head-to-toe Chanel for the evening. “I’ve done friends’ little things in Los Angeles but this is the first proper event — and it’s actually really, really, really exciting. I’ve been waiting for the world to come up because I think it left a lot of underlying depression and I think it’s taken a toll, more than we realize.”

Hemingway was in attendance at the festival for the premiere of “Query,” produced by her best friend Sophie Kargman and boyfriend Nick Delli Santi (she was at the party with Kargman). The short was supported to premiere at the festival in 2020 but they were brought back this year to have their due.

“I feel like there is so much pent-up energy, so we have been running around the city,” Hemingway said. “I walked 13 miles yesterday — I’m a little in pain, I’m not going to lie.”

Holmes snuck in past photographers and kept a low profile throughout the event. Young and Gates were seen whispering like long-lost school pals, while Sarkozy, most recently seen publicly on the leaked screengrabs of his Zoom divorce proceedings from Mary Kate Olsen, wore an eye patch, picking up a pack of Milk Duds as his movie snack of choice.

The evening’s host, Schnabel, who was overheard telling guests that he and his wife, Louise Kugelberg, are expecting a baby, said work-wise the lockdown was an inspiring time for the couple.

“My wife and I work together — I can paint by myself but then we were writing some things and we got a lot done. It was an amazingly productive time for me,” he said. “I’m outside in Montauk; it’s quite different if you’re locked in a room. We were very privileged.”

Wonders, a breakout actress seen in HBO Max’s “Generation” (and the niece of Anna Sui), made it a date night with her sister Jeannie. She said that despite starring on a hit HBO show, she’s managed to avoid noticing any changes to her life by keeping busy.

“I came back from L.A. and I’m so lucky to have done an A24 horror movie right away — so I came back to New York and dove into this crazy nocturnal world where I was covered in mud and blood and sweat and rain the whole time,” she said. “I just wrapped on that last week. That continued the cocoon of keeping focused on working, keeping my energy channeled towards that.”

Near sunset time, the crowd found their way into seats after stocking up on popcorn, personal trays of chips and queso and boxes of Whoppers and Twizzlers and were ready for showtime.