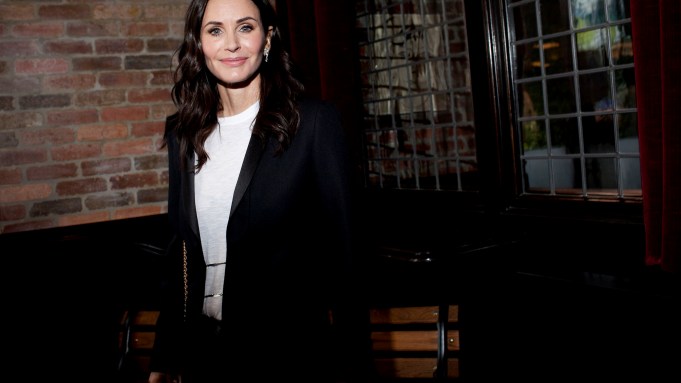 “It’s pretty rare that I go to a lunch because I have a no lunch policy, because the word luncheon is ‘lunch’ plus ‘eon’ — because it’s eons and your whole day is ruined,” said Jill Kargman, sipping a Bellini upon arrival. She makes an exception to her rule for the Chanel Tribeca lunch, however.

“Especially working in television but living in New York, I feel really disconnected from the business — and part of it’s my fault, I don’t read the trades because I just feel like a faker,” she said. “But I feel like I know more people in the New York film and TV community.”

She was most looking forward to meeting Kathryn Bigelow, who mingled about but politely declined to be photographed.

“I love Kathryn Bigelow — I might social climb her,” Kargman said.

“Jane Rosenthal is a very dear friend, and I really appreciate how she wants to identify young filmmakers, young women who are coming up,” said Roberts. “Our voices need to be heard — they’re still not completely.”

Roberts called out friend Jane Rosenthal as a women in the industry who has inspired her in the last year.

“Ava DuVernay is consistently having a fabulous year,” she added. “Patty Jenkins, what she has done. I long for the day that I can’t even name everybody because there will be so many.”

“Woah!” said Deborra Lee Furness as a camera flash went off in her direction. Nearby, Goldani Telles chatted with an enthused Sophie Auster. Publicists huddled by the espresso machine while their clients mingled freely. Leo went straight to her seat, squeezing past the starlets in their tweed skirts who stood glued to their phones.

Rosenthal called attention shortly after lunch began, welcoming the room of “impolite, arrogant women” — referencing the slurs Elizabeth Warren has been called. The intro drew quite the reaction from the room. “They told me not to be political,” Weinstein said. “But anyways…”