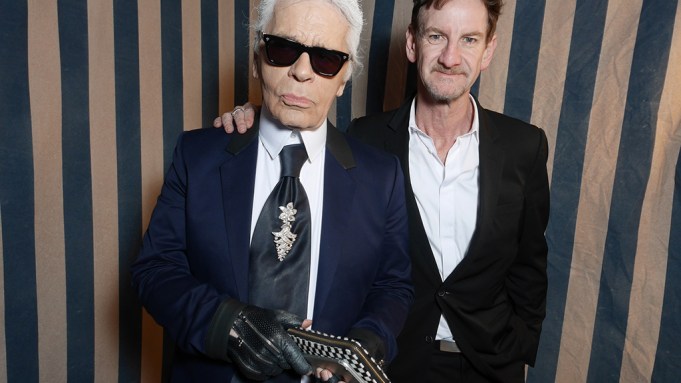 GONE WITH THE WIND: It’s a Cannes moment to savor: The annual Vanity Fair dinner co-hosted by Chanel at Chez Tetou, with arguably the most delicious bouillabaisse on the French Riviera — and a ravishing view to match.

“This is like our Oscar party,” said Jonathan Newhouse, chairman and chief executive officer of Condé Nast International about the event on Wednesday night, now in its third edition.

Karl Lagerfeld was adamant that it was not a “fashion party.”

“Vanity Fair invites only people I like. So I’m not lost in the middle of nowhere,” he noted, punctuating his traditional black-and-white uniform with a large floral Suzanne Belperron brooch pinned to his tie.

“All the blow-drying – literally gone with the wind,” mused Audrey Marnay, who said she was taking up classes with a coach to study acting more seriously. The Chanel model, who had landed a role in George Clooney’s “Monuments Men,” said she was eyeing “more heroic and fantasy characters” for her upcoming ventures.

Lewis came with sculptor Daniel Arsham, who presented his third short film “Future Relic” out of competition. “It’s about people in the future finding commonplace things like a camera or a baseball. But it’s so human and emotional – after the first short film in cried, I wanted to be a part of it,” said Lewis, dressed in a Helmut Lang skirt and Isabel Marant jacket.

Lewis’s series, “Secrets and Lies,” just got picked up by ABC. “You know how TV is a whole thing, where they look at your numbers, you do well, people watch it,” she explained, “but it’s exciting for me ‘cause I work four and a half months of the year and then am free to do as I wish.”

In her next feature film “Jem and Holograms,” due out next year, she plays the villainous music producer Erika Raymond. “They gave me an offer I couldn’t refuse: Originally, in the cartoon, Erika is a man,” she smiled.

It’s been non-stop for Ronson, who’s been deejaying almost every night at the festival. He just produced “Everyday,” ASAP Rocky’s new single, also featuring Rod Stewart, and is now getting ready to do some touring. “We will start in Glastonbury, and it’s a very nervous start. It’s only the most important [festival],” he stated shyly, adding: “It will be rehearsed.”

Cecile Cassel, in a sparkling Chanel couture number, is heading to Liverpool. “I will play at the Sun City Festival, then touring in the U.K. in September, all around Europe and Asia,” said Cassel, who came to support Maiwenn’s “Mon Roi,” a contender for the Palme d’Or, starring her half-brother Vincent Cassel.