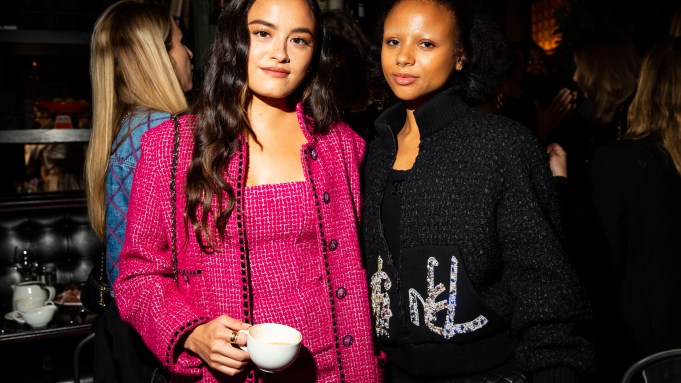 Continuing its long-standing commitment to film, Chanel returned to Locanda Verde in the TriBeCa section of New York on Tuesday for its annual Women’s Filmmaker Luncheon, the first since before the pandemic. The “Through Her Lens: Tribeca Chanel Women’s Filmmaker Program Luncheon” marks the kick-off of the program, during which the selected participants partake in master classes, pitch meetings, mentor sessions and more.

Shipp is working with Tribeca this year as one of the jury members in the program.

“I had spoken with Chanel probably a year ago about how interested I am in women in film, not only as a woman in film but just wanting to push that narrative forward for women,” Shipp said on the red carpet before heading into the restaurant. “And it’s something that I look for with jobs, it’s something that I ask for in jobs, and so it just means a lot to me to not only see myself but feel safe in those spaces. And women just know how to make women feel safe.”

When asked who the last amazing woman in film she worked with was, she didn’t have to reach back too far, having just wrapped “Barbie” with Greta Gerwig.

“She is brilliant; she’s this mad scientist of ideas and forward-thinking and feminism,” she said.

Chandler, who broke out in “Pistol” this summer and will next be seen in “Don’t Worry Darling” (you may have heard of it?) similarly praised a recent colleague.

“Is it horrible to say watching Florence [Pugh] in ‘Don’t Worry Darling?’” Chandler replied. “She’s just such an incredible actress and she brought so much heart and the struggle of a woman in that story — being able to see what she did with that touched me in that way.”

Hewson also raved of her most recent costars, on the Apple series “Bad Sisters.”

“We worked with all women — it’s very fitting to say that for this [event], but it was three women doing all blocks of the show, a female creator, an all-women cast. It was very estrogen-centric in a beautiful way,” Hewson said. “We became like a real family. It was really nice to have sisters on set, because usually when you work you’re one girl with loads of men, and so this was a different kind of bonding, special experience.”

Myha’la Herrold, spotting of-the-moment bleached eyebrows, said she’s sad her HBO show “Industry” has finished airing its second season but that it’s been rewarding to watch the show take off.

“Its been a whirlwind. I feel so proud that it feels like finally the show is getting the attention that I have always believed it deserved,” she said. Up next, she’ll be seen starring alongside Julia Roberts, Mahershala Ali and Ethan Hawke in “Leave the World Behind,” “which is crazy,” she said.

Inside, guests snaked throughout the packed restaurant in their Chanel finest, before sitting down to a lunch of antipasto, mushroom pasta, beets with pesto and flank steak. Toasts were made but kept brief — there was some serious power mingling to do.