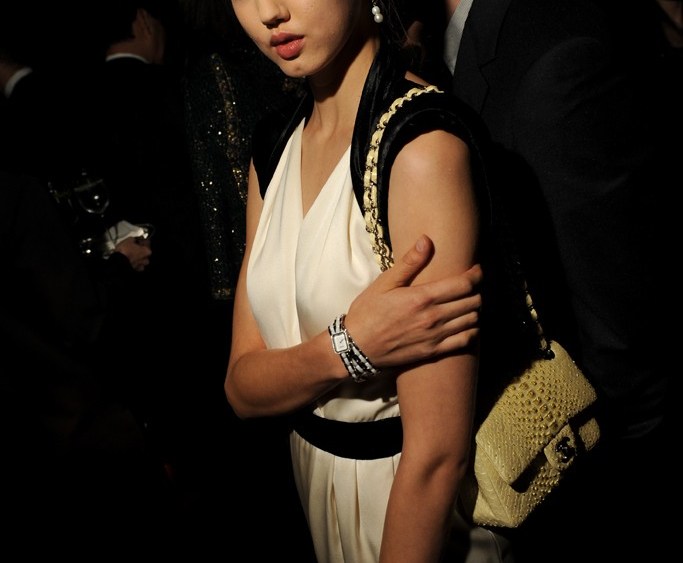 “It’s so weird and dark in here,” Rose Byrne said to a friend shortly after arriving at the former site of the Museum of Folk Art in Manhattan on Tuesday night for a dinner to toast Chanel’s latest fine jewelry collection. The Midtown space was so dimly lit that it could only be described as cavernous. Yet even through the darkness, one could make out a sea of tweed, chain straps galore and the blinding bijous adorning the ears, necks and hands of the evening’s attendees, including Blake Lively (her new hubby, Ryan Reynolds, hightailed it inside to avoid being photographed), Elle Fanning, January Jones, Diane Kruger and Lindsey Wixson.

The sparklers were all procured from the couture house’s new high-jewelry line, a reimagination of Gabrielle Chanel’s first fine-jewelry collection, Bijoux de Diamants, created 80 years ago. During cocktails, revelers were led into a separate planetarium room, lit by a projected starry sky above, to take in the objets d’art on display. The collection, aptly named 1932, is a riff on Gabrielle Chanel’s signature motifs: comets, feathers and ribbons conceived in an assortment of white, yellow and black diamonds, blue and pink sapphires and pearls.

The lucky few who borrowed a bauble or two for the evening were mindful of their finery.

“They were delivered with a guard,” said Nora Zehetner of the diamond-encrusted pair dangling from her ears. “I think they’re worth more than everything in my apartment.”

Byrne also erred on the side of caution.

“We originally were loaned clip-ons, but I put them on and I was like, ‘Listen, I can’t. These will fall off,’ ” the actress said. “I’ve got tiny ears!”

Kruger opted for a single earring instead of a pair.

“It’s purposeful. I wanted to be less classic, and it goes with my hair,” Kruger said of her half-gilded look, which complemented her coiffure, swooped over her bare ear. Lively was in the clear, as there was no chance of her misplacing her jewels.

The newlywed was on her toes when it came to questions about her recent nuptials. When she was asked what her most treasured jewelry piece is, her hovering p.r. rep shook her head as if to signal to the starlet to sidestep the engagement ring-wedding band trap.

“My grandma’s old watch,” Lively demurred before rushing to her dinner seat.

After the first course, a trio of crudo, was cleared, a smoky mist filled the room, indicating that the broody Brit indie rockers The xx were about to take the stage. Lively and Reynolds sat quietly front and center, politely taking in the performance. At a neighboring table, Leigh Lezark and Harley Viera-Newton bopped to the music.