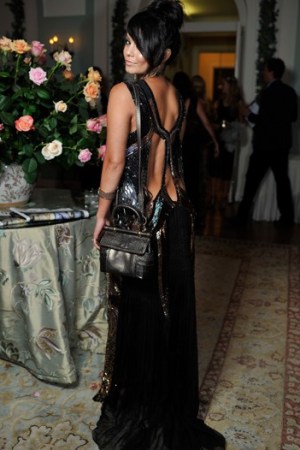 During his speech, Finch joked that the night’s guest of honor, Oscar and BAFTA award winning producer Jeremy Thomas, who is a keen swimmer, hadn’t yet bought a pair of swim shorts from Finch’s newly launched Chucs clothing line. Finch has an pop-up Chucs store in one of Hotel du Cap’s cabanas during the festival. “I wear Speedos, you know,” revealed Thomas later on. Jane Fonda, who has been wowing the Cannes crowd all week with her physique, dropped in on the party hot off the red carpet for the “Pirates of the Caribbean: On Stranger Tides” screening, wearing an off-the-shoulder Badgley Mischka dress accessorized with a bag and heels by Jimmy Choo. The jewelry she wore on the red carpet, a Chopard 53.5-carat diamond necklace with a whopping 160-carat cushion-cut blue sapphire pendant, was safely back in the jeweler’s vault. Asked about his latest accomplishments Harvey Weinstein said that they weren’t as important as those of his wife, Marchesa’s Georgina Chapman. “I’m just here for Marchesa, I work for her,” he said, reeling off Chapman’s red carpet trumps in Cannes, including dressing Pirates’ lead Penelope Cruz earlier that night.

A jovial Mick Jagger, who earlier had enjoyed an incognito walk along the Croisette with his own glamorous working woman, stylist and designer L’Wren Scott, said that all he had on his agenda was having fun.