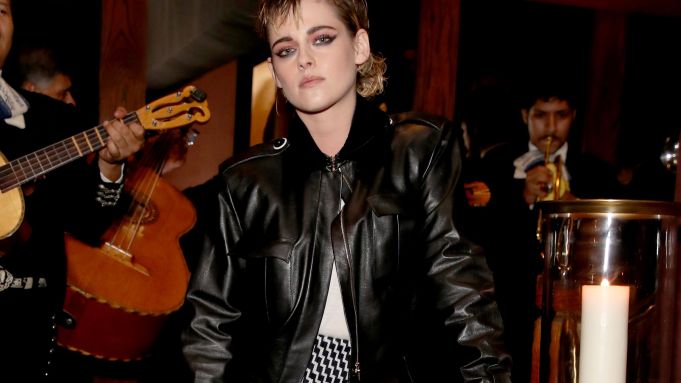 While it wasn’t exactly corporate downsizing, the Charles Finch and Chanel pre-Oscar dinner, famous for packing A-List stars like sardines into the narrow Madeo restaurant, decided to take things down a notch this year. The guest list and the number of tables was reduced to allow for a bit more elbow room for guests including Kristen Stewart, Margot Robbie, Daniel Kaluuya, Leonardo DiCaprio, Adrien Brody, Tracee Ellis Ross, Yara Shahidi, Stella Maxwell and Jessica Hart. “It’s crowded in here,” said Jeff Bezos as he balanced his martini, perhaps not recalling what it was like the year prior.

The scales may also have been tipped toward the Brits: Mick Jagger, Jamie Dornan, Amelia Warner Sienna Miller, Annabelle Wallis, Edgar Wright and Joe Wright — who entered with holding hands with new girlfriend Haley Bennett — were also in the mix, while there seemed to be fewer French people. “We’ve been here [in Los Angeles] for six weeks and we have one week left,” Dornan told Edgar Wright. Elsewhere, Kaluuya extolled the virtues of West London versus South London.

Per tradition, a mariachi band serenaded diners as they descended the staircase into the basement-level Italian restaurant. Those who arrived at 7:30 on the dot included John Carrabino, Brody and girlfriend Lara Lieto, Bezos and Alejandro Gonzalez Iñarritu. They were closely followed by a Leica-toting Jean Pigozzi and Nicolas Berggruen. “Where are you going? Do you have a better party?” asked Berggruen as one gentleman beat an early exit. There were many happenings the night before the Oscars, but few feature waiters banging spoons on iron skillets when it’s time to sit down to dinner.

“I may not be a Navy SEAL, but I am brave,” laughed Finch when asked how and why he’s kept the party going for a decode strong. “Now let’s do this, baby.”