The event was the first annual Chucs Serpentine Swim, an outdoor gala in aid of Charity Water. 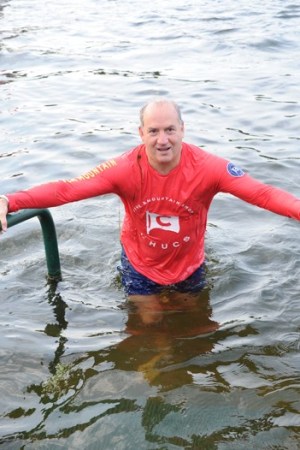 WATER BABIES: “I don’t need a hot chocolate, I need alcohol!” declared a shivering India Hicks, after an early evening swim at the Serpentine Lido, sponsored by London brand and talent agent Charles Finch. “We all live in the Bahamas but we nearly drowned! Since Charles won though, I’ll say I was on his team.”

The event was the first annual Chucs Serpentine Swim, an outdoor gala in aid of Charity Water, and branded by Chucs, Finch’s outdoor brand of clothing and accessories.

The racers were cheered on by Hugh Grant, Bjorn Borg, Tallulah Harlech, Arpad Busson, Chloe Green, Camilla Rutherford, Amy Sacco, and Melissa Odabash who attended with their children. There was a live reggae band, burgers and Prosecco.

“I wouldn’t get in that water if you paid me! No, I am much happier to watch thank you,” joked Odabash
as the race began. Meanwhile, Patrick Grant’s ambition was clear: “I just want to beat Charles,” he said.

Meanwhile, Green, daughter of Topshop’s Sir Philip Green, talked about her new venture for the fashion chain. She’s just 20, but already plans to follow her father in to the fashion business.

“I’m starting with a collection of shoes,” she said during the party. “We’re aiming for February.” Green was tight lipped about the range, except to say: “It will be like my own personal style. I’ve designed everything myself.”