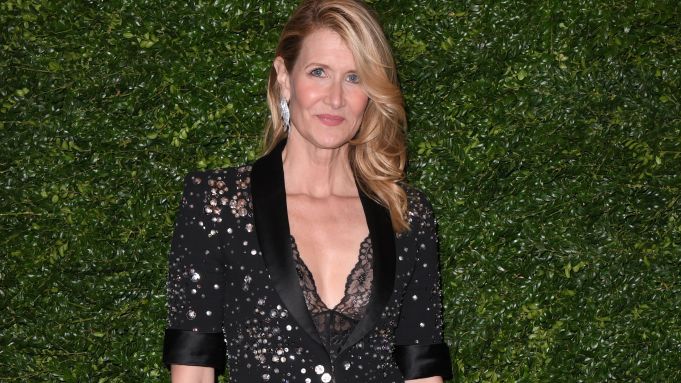 LONDON – “What room are you sitting in?”

No, they don’t all know each other, and emotions – and insecurities – were running high.

The 18-year-old actor Freya Allan, who plays the lead character Crown Princess Ciri of Cintra in Netflix’s hit series “The Witcher” with Henry Cavill, said she was excited and “pretty nervous” about attending her first BAFTA Awards ceremony on Sunday.

Walliams, the British comedian, actor and best-selling author, was also new to the dinner. He said he was grateful that a “TV person” like him finally got invited to come to a “film” event.

“I am enjoying it already,” said Walliams, who was dressed in a double-breasted Tom Ford suit, Hermès pocket square and Berluti shoes. “Everyone in the film world is completely looking down on me because I am a TV star, but I am enjoying seeing them. I like to see what people are wearing, and catching up with old friends.”

Walliams was hanging out with David Furnish, who was wearing a sleek Dior Men’s suit by Kim Jones, and fellow funny man Hugh Grant, who was decked out in Richard James.

He said his personal favorites this year are “Marriage Story,” “1917” and Netflix’s “Murder Mystery.” Walliams co-starred with Adam Sandler and Jennifer Aniston in “Murder Mystery,” which had the biggest opening weekend in the history of Netflix films. Some 30.9 million households watched it in the first 72 hours after its release.

Finch, who’s been holding the pre-BAFTA party for decades, arrived at 8 p.m. sharp – and had to talk his way past security. “I am not attending, I am hosting the night,” he said to the security guards at the entrance, where a crowd of fans had gathered to spot their favorite BAFTA nominees.

Actor and filmmaker Greta Bellamacina, in a Chanel couture dress with black and white camellias, arrived early with her husband, artist Robert Montgomery. “It’s actually from the show I attended last January,” she said, referring her choice of outfit for the night.

Her latest film, “Hurt By Paradise,” which she co-wrote, directed and starred in, is coming out in cinemas in April. Bellamacina revealed that she has taken a role in a new British comedy, and will start filming in March.

Gwendoline Christie, who was dressed in a bold red cocoon-shaped dress designed by her partner Giles Deacon, said she was ready to have a good time.

“You know what I love about this party? Charles Finch always selects an interesting and eclectic cross-section of people. You have those are in town to be recognized by the BAFTA, and different sorts of creatives across the industry,” she said.

Christie plays Jane Murdstone in the newly-released “The Personal History of David Copperfield,” and said she will be rooting for Laura Dern at the awards on Sunday evening. “Her performance in ‘Marriage Story’ is so dynamic and electric. She just sizzles up the screen.”

Dern, who was dressed in a chic Chanel haute couture jacket with matching trousers, already scooped a Golden Globe for her performance in “Marriage Story,” wasn’t too fixated on winning.

Asked how confident she was for Sunday, she said:” I am never confident, because it would take me out of any moment of just being present to celebrate the good fortune to be in a movie.”

A muse for Raf Simons, Dern said she believes he would do an amazing job at Prada and Miu Miu, if the rumors about his going to work for the Italian house are true.