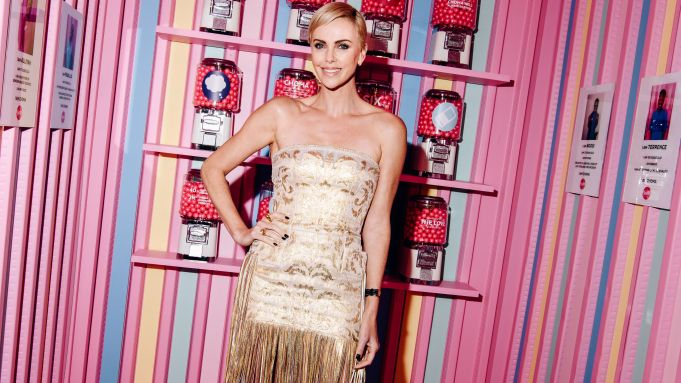 On Tuesday night, Charlize Theron took her fund-raising efforts to uptown Manhattan for the Charlize Theron Africa Outreach Project. Hosted in New York for the first time, at the Africa Center in East Harlem, N.Y., the event drums up support for the initiative founded by Theron over a decade ago to provide health resources for youth living in Africa.

“I feel like it’s the right thing to do,” the actress and South Africa native said of her continued commitment to the cause. Among its efforts, the organization aims to provide education and resources for young people living with HIV and AIDs, 85 percent of whom live in sub-Saharan Africa. “It’s obviously where I’m from, and I’ve been personally really affected by the unnecessary suffering that a lot of people of my country have faced, and still face, because of something that is completely preventable. I don’t know how to disconnect from that; it’s just a part of me. I always knew that if I was ever fortunate enough to give back in a big way, it’d be South Africa,” she added. “It was a no brainer for me.”

The event was hosted by Awkwafina, who could be found chatting with Drew Barrymore during the cocktail hour. Other guests at the intimate dinner included Amy Schumer and her chef husband Chris Fischer, former president of South Africa Kgalema Motlanthe, Nelson Mandela’s grandson Kweku Mandela, chefs Geoffrey Zakarian and Andrew Zimmern (who along with Pierre Thiam prepared the South African menu), and Deborra-Lee Furness.

During the live auction, guests had the opportunity to bid on a trip to South Africa and private styling experience at the Dior flagship. “This is lit, y’all. I don’t even get to wear Dior. One day, y’all,” said Awkwafina in an effort to drum up excitement.

Theron is a longtime friend of Dior, which sponsored the event, and the face of their J’Adore Absolu fragrance. Already in town ahead of the Dior Guggenheim gala, creative director Maria Grazia Chiuri trekked uptown to show her support before heading back down to Bergdorf Goodman for an event.

“I think honestly it’s about relationships between someone that is part of our brand,” Chiuri said of making the time to stop by. “But also she embodies so well a new generation of celebrity that invests a lot of time in other activities like education. And I think it’s important to support that, too. It’s really a relationship and everybody has to be there.”

Theron also tapped into her relationship with Boyz II Men. The actress worked with the group for the film “Longshot” and the musical trio capped off the evening with a short acoustic performance.

“Honestly, it was a phone call that Charlize made,” said group member Shawn Stockman, who was warming up and harmonizing before taking the stage. “We met her previously working on a movie together, ‘Longshot,’ and found she was a big fan of ours. She told us about this charity event and what she’s doing, and if we didn’t mind if we had the time to come by. And we were like, ‘absolutely.’ And we’ve been educated on what this organization actually does, which is amazing for the youth in Africa, so that’s an extra bonus. We get to do something for a friend and we get to learn and participate in something that will affect a lot of people in a big way.”