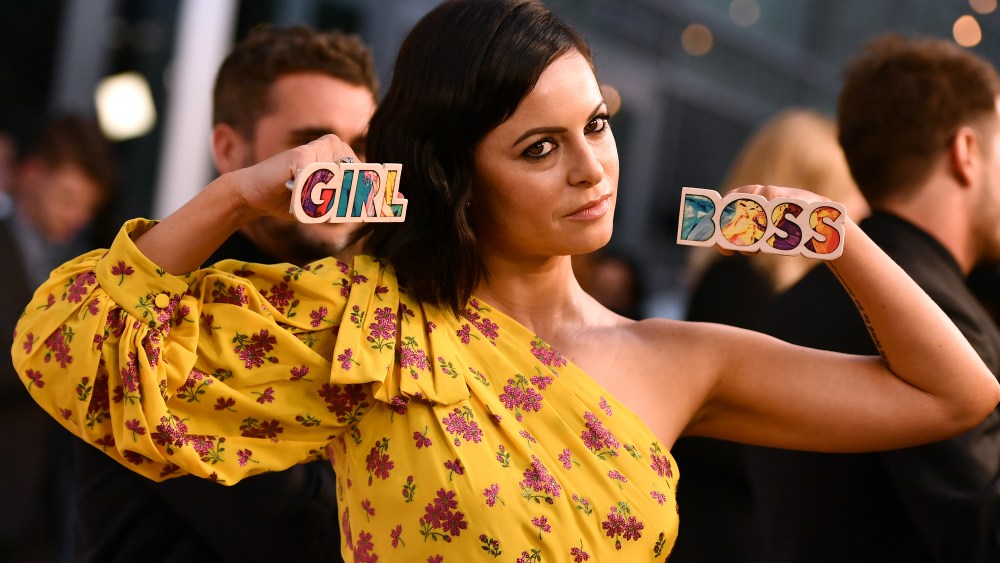 Art imitates life, or at least very loosely, according to Netflix’s latest original series “Girlboss,” which had its series premiere Monday night at the ArcLight in Hollywood.

“The character has been fictionalized,” Sophia Amoruso said on the pink carpet after posing with the castmates Britt Robertson, Ellie Reed, Alphonso McAuley and Johnny Simmons. “There are a lot traits that aren’t like me, but then there are some character traits that are like me. I am prude and we see that in the show. There’s a scene where she’s making out with her boyfriend or someone who will be her boyfriend and she’s like, ‘OK, I’m done.’ No one really does that. That’s something I might do.”

The fictional account of Amoruso’s rise to e-tailer fame, building the Nasty Gal business, takes the comedic route via “Pitch Perfect” writer Kay Cannon, who serves as director and writer for the series and was ready to add more female versatility to the screen.

“I was seeing a lot of TV shows and movies about flawed men,” she said. “I felt like when I was watching about women it was connected to who they were married to or who they were dating. I was really looking for something that had nothing to do with that and really only had something to do with a flawed woman. I really wanted to tell that story. I feel like it’s not represented on television right now.”

“I was given the book and I had a trip,” Theron said. “I read it the on the plane. The next day, I asked to buy the rights and then things moved pretty fast.”

Theron looked back saying, “I wish I had something like this when I was 19, something that told me it’s OK to make mistakes. It’s OK to be a failure. It’s OK to be angry. It’s OK to hate the world sometimes and hate your parents and to dream big and want to do big things.”

The actress noted not all will make it to multimillion dollar business status, but the series hopes to continue Amoruso’s motto of “being the boss of our own journey.”

While reviews are still coming in for the show, which debuts Friday, perhaps the one that matters most is Amoruso’s who said, “I’ve seen the series more than once. I really love it. To not hate the show about your own life I think is really good.”