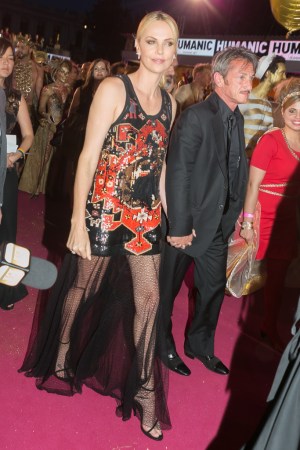 VIENNA – “I’m a virgin Life Baller; this is my first time,” said Charlize Theron, causing crowds to cheer at the 23rd edition of the Life Ball, billed as the largest HIV and AIDS charity event in Europe, here Saturday.

Fresh off the premiere of “Mad Max: Fury Road” in Cannes, the Academy Award- winning actress was busy promoting the work of the Charlize Theron Africa Outreach Project, which helps adolescents prevent spreading the disease.

“There is a saying in Africa: If you want to go first, go alone; if you want to go far, go together,” she said, adding that in her home country of South Africa, young girls and women accounted for 80 percent of new HIV and AIDS infections, with abuse on the schedule and shame surrounding the disease. “We are because others are; we don’t live in a vacuum, we are all interconnected,” she preached, supported by her partner Sean Penn, who came to speak on behalf of the Clinton Health Access Initiative, a partner of the Life Ball since 2007.

The former president was grounded. “He excused himself – he is helping his wife with her campaign,” said Gery Keszler, Life Ball’s founder, who had launched the weekend-long celebrations on Friday with the Red Ribbon Celebration Concert featuring Anna Netrebko, Gregory Porter and Juan Diego Florez.

“We reached a milestone,” declared Penn to an eclectic crowd of drag queens, local politicians and celebrities who were flown in on a special plane from New York. “We are able to treat 15 million people by 2015,” he said, encouraging the audience not to throw in the towel.

Mary J. Blige provided the hymn to the message, crooning U2’s “One Love (One Life)” while Jean Paul Gaultier turned up the glam factor with a retrospective of his œuvre, encompassing more than 20 years of artsy couture and flamboyant ready-to-year styles.

The designer, whose traveling exhibition “The Fashion World of Jean Paul Gaultier: From the Sidewalk to the Catwalk” is making a stop in Paris until Aug. 3, reversed the gender roles, sending out men in corsets and women in clin d’oeil tuxes.

“This is an amazing celebration of life,” ruled Riccardo Tisci in a black tuxedo and matching moustache. “We decided to come last night, very last minute, and it’s so much more than I expected,” he said, meandering backstage between the 120-plus looks Gaultier picked for the show, noting that his fellow designer was the perfect match for the occasion. “It’s incredible how he gives life to gowns,” he knowingly observed.

Paula Abdul, who will debut as a judge on a new edition of “So You Think You Can Dance” next to Nigel Lythgoe and Jason Derulo, joked: “In my head I’m six feet tall, but then I look around and I’m like: ‘What’s wrong with this picture?’” Her new show is slated to air June 1. “It’s a different format this year, it’s street versus stage, so you’ll see raw authentic street dancers,” she explained.

In a butterfly corset flying off her chest, Dita von Teese couldn’t wait to shake off her outfit despite its exotic allure. “There is a very short time limit on wearing it, the waist is cinched to the maximum, so it doesn’t last long,” divulged the burlesque performer and entrepreneur.

Von Teese made a stop in Vienna before heading to Harrods to roll out her lingerie line at the London department store. In December she is due to publish “Your Beauty Mark” with Harper Collins. “What I really love about the book, [which took five years to write, she added], is that it’s referencing eccentric beauties, it’s not about the standards of beauty, but women who dare to be and look different instead of looking like everybody else. I guess it’s an empowering book,” she said.

Kelly Osbourne marvelled at the grandiose stage set up in front of Vienna’s City Hall below a giant replica of the Vienna Secession building, it’s golden leaves shimmering in the spotlights. The ball’s motto was Ver Sacrum, or “sacred spring,” in honor of the ancient Roman festival, which inspired the Vienna Secessionists to break with mainstream art, sparking Gustav Klimt’s golden period, among others.

“When you are in America you forget how beautiful architecture and how old buildings can be,” Osbourne said. “Last night, I was walking taking pictures, and my mom said you need to stop because the next thing you know you will be buying a house and redecorating it,” she laughed, flashing her new tattoo inked across the side of her head. It read: “Stories” like her new clothing line, but also “because I am dyslexic, so I need to create stories to remember things,” she divulged.

Gaultier said of some of the show’s looks were directly inspired by Klimt. “I am a huge fan. What he did was fashion in some way – the hair and the makeup,” he said, picking up on clues for his own show with models sporting pumped-up versions of Adele-Bloch Bauer’s curly mane.

Linda Fargo, senior vice president of fashion at Bergdorf Goodman, dressed the motto as well in a gold embroidered Charleston dress from Naeem Khan, her “go-to guy for the red carpet,” as she put it.

The New York department store has teamed up with the Life Ball, dedicating its 58th Street windows to the event, which has collected more than 22 million euros, or $22.5 million at current exchange, since 1993. “We hope to turn this into more going forward, we are always involved in charities, but this one is particularly dear to us, because so many people who come from the creative field have been affected by HIV and AIDS. I know a lot of focus is turning to Africa and its challenges, but this is a cause that we cannot let our guards down about,” said Fargo, calling the event a “celebration of life.” “At a lot of balls people get uptight, but this one is definitely a lot of more festive, with diversity inherently built into it,” she remarked.