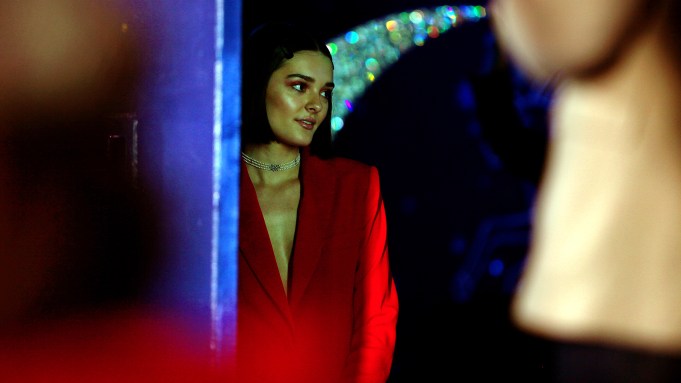 The Diane von Furstenberg store in New York’s Meatpacking District was packed Sunday night with a strictly fashion crowd — save singer Charlotte Lawrence. She’d come to the party thrown by von Furstenberg herself to perform two new songs at the behest of the designer, whose granddaughter Talita is Lawrence’s friend. With just a guitarist by her side, she took her spot on the makeshift stage while guests sat on the staircase in the middle of the shop create some standing room.

“This next song is the latest one I’ve written,” she said into the mic. “We’ve never performed it live before. I’m not sure we even know the arrangement, but what better place to go for it?”

Following her set — which included a cover of The Killers’ “Mr. Brightside” that passersby on the street sang along to, standing by the glass doors at the entrance — she discussed her long-term goals for her musical career.

“I’m doing an album right now, I’m finishing it up,” she said. “It’s been a few months in progress, but we’re finally starting to get it done. I feel so grateful that I’m able to do it as a job and I just want to keep performing.”

“I wanted to give a party for everybody to enjoy,” von Furstenberg said. “Fashion week is a continuation of things that are changing; The world is changing and new designers are coming in. If you don’t embrace the change, you stay behind.”

Activist DeRay McKesson arrived on the later side with Cleo Wade, with whom he planned to attend the Prabal Gurung show later that evening. He wore a black jersey from Colin Kaepernick’s line with Nike — he’d attended the launch party a few days ago.

“It’s important that we take the truth with us into every room we walk into,” he explained on why he’d decided to wear the jersey during fashion week. “Fashion isn’t exempt. Everything we’ve seen with the recent controversies in fashion, with [Gucci and Prada], it’s more important now than ever to take the truth with us. This is my way of taking the truth about the issues with me. This room isn’t exempt from having issues present.”