She hosted a dinner party at her funky London apartment to mark her appointment as style editor of the beauty brand. 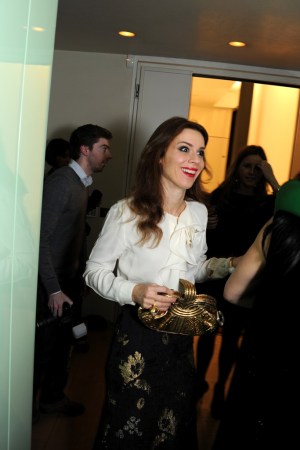 “The only person who could make me go out tonight and wear a dinner jacket is Charlotte,” said Roland Mouret, referring to his pal Charlotte Stockdale, who hosted a dinner party at her funky London apartment Monday night to mark her appointment as style editor of beauty brand Jo Malone.

Mouret — who’d flown in from New York earlier and spent the day working on his Robert Clergerie collection — joined guests such as Simon and Yasmin Le Bon, Alannah Weston, Lara Bohinc, Jacob Rothschild and Nicholas Kirkwood at the home Stockdale shares with her husband, the industrial designer Marc Newson. There were glimmering scented candles, a tinkling grand piano and a dinner menu designed around the three signature scents of Jo Malone.

“Last time I was here, I was a crasher at a Sergio Rossi party,” recalled Kirkwood. “So it’s nice to see my name on the table this time.”

Stockdale, who spent the evening bustling around, putting her children to bed and stopping to catch up with old friends, said her approach to her new role was simple: “You wear perfume just like you wear clothes. It’s still all about enhancing yourself. I don’t see them as any different, really.”