The Place Vendôme jeweler hosted a cocktail for the 34 actresses and actors vying for a César Award. 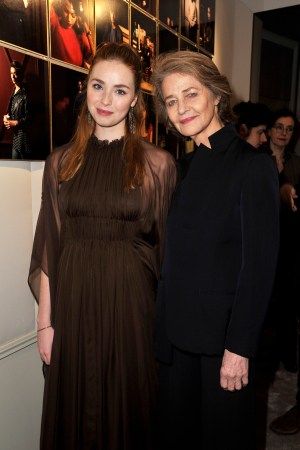 A who’s who of French cinema gathered in Paris Monday night to celebrate the young talents vying to be dubbed the most promising actress or actor at the César Awards, the French equivalent of the Academy Awards.

Agents, producers, directors and actors broke bread in a gilded ballroom of the Meurice hotel — because if there’s one thing everyone can agree on, it’s a menu concocted by Alain Ducasse.

Walking into the cocktail held earlier in the evening at Chaumet’s ornate headquarters on Place Vendôme — the brand sponsored the evening — Rampling came face-to-face with a photograph of herself taken by Helmut Newton in the Seventies, part of an exhibit highlighting the jeweler’s historic links with cinema.

“I just spotted it — yeah,” she said, dryly appraising the sultry image.

The British actress was equally sanguine when discussing rumors that she may be nominated for an Oscar for the first time for her performance in “45 Years,” which has already won her the Silver Bear for Best Actress at the Berlin Film Festival.

“Well, it’s just talk,” she demurred. “People love awards, people love prizes, people love competition, so it all helps the film, it helps the actor, it gives you another form of recognition also to a public who may not know you so well.”

She was flanked by her protégée for the evening, Scottish starlet Freya Mavor, who plays a younger version of Rampling’s character in the upcoming “The Sense of an Ending,” adapted from the Julian Barnes novel. Mavor kept a cool head about potential comparisons to the star of seminal movies like “The Night Porter.”

“I had to try and not think about that too much, otherwise I would have been trembling in every scene,” she said.

Mavor, who got her break on British television series “Skins,” looked every inch the movie star in her Valentino gown, but hiked up its floor-length skirt to reveal a pair of combat boots underneath.

Fellow nominee Stacy Martin also kept it casual with barely-there makeup and her bobbed hair in a half-up ponytail. “I’ve just landed today, so I’m a bit frazzled,” she confessed. The face of Miu Miu perfume brought her godmother Bejo, who starred with her in “The Childhood of a Leader.”

“It’s nice to have support and to have encouragement with these kind of awards,” said the Franco-British actress, who will be seen next in “The Last Photograph,” adapted from the best-selling book by Simon Astaire.

Newcomer Mathilde Bisson came with Casta, who cast her in her directorial debut, a short film that is in the post-production phase.

“She is a beautiful woman on the inside and out,” the statuesque blonde actress said of her mentor. “She impressed us all on the shoot because she knows what she wants. She is very intelligent and she really has a specific vision of film-making. It’s very dreamlike, glamorous and beautiful.”

It feels like not so long ago that Tautou was the leading ingénue-about-town, but she plays the mother of Martin Loizillon, one of the male nominees, in Tran Anh Hung’s upcoming feature “Eternity” — despite being only 13 years older than him.

“In the scenes where Martin is my son, I’m older than in real life,” the “Amélie” star explained. “It’s a movie that transcends ordinary cinematic codes. There’s something very contemplative about it, as you follow a family and its descendants over the course of a century.”

Photographer Sonia Sieff captured all 34 contenders for the award, due to be handed out at the César ceremony on Feb. 26, in a series of stills and a short film presented at the cocktail. Contrary to previous editions, the movie had a storyline.

“It was an almost impossible challenge to give each of the 34 actors the same amount of screen time, but everyone has a line,” she said. “It was a real juggling exercise with constant rewrites and lots of unforeseen events. I think even they, at some point, feared that we might not pull it off.”