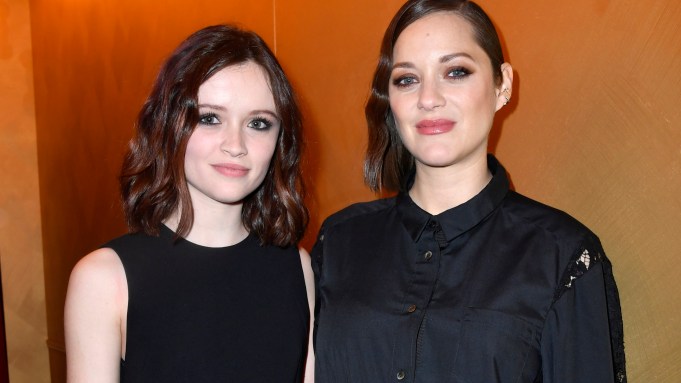 A cast of the biggest names in French cinema packed into the salon of the jeweler Chaumet to celebrate the 34 young talents competing for this year’s award for most promising actor or actress at the Césars—the French equivalent of the Oscars. Nominees including Lily-Rose Depp, for her role as Isadora Duncan in “The Dancer,” were each accompanied by a more established star — their “godmother” or “godfather” for the evening.

“This really gives you butterflies in the stomach,” said actress Marilyn Lima, after being mobbed by cameras upon her entrance to the party with Marion Cotillard.

Cotillard — who won an Academy Award for “La Vie en Rose” — said she had been impressed by the contrasts in Lima’s performance in the coming-of-age drama “Bang Gang (A Modern Love Story).”

“She has this light that comes from her, but there’s a very dark element as well,” said Cotillard, currently on screens in the Hollywood adaptation of the video game “Assassin’s Creed.”

Cotillard’s partner, the actor and director Guillaume Canet, also accompanied a young star — as did her costar in the upcoming “Ismael’s Ghosts,” the former Bond villain Mathieu Amalric.

He plays a film director in the movie, which also stars Charlotte Gainsbourg, but is currently directing a film in real life, a biopic of the singer Barbara starring Jeanne Balibar. “I’m only directing a little bit,” said Amalric. “This is really about the actress, Jeanne, and how she embodies the role.”

Clémence Poésy was chaperoning Paula Beer, a German native who is nominated for her work in François Ozon’s post-World War I drama “Frantz.”

Working across borders has been a defining element of Poésy’s career. She has starred in the British TV series “The Tunnel” since 2013 and recently shot a film in Italian. “I’m from the Erasmus generation,” she said, referring to the European Union’s university exchange program. “For me, Europe is something very important. It’s taking some hits right now, like with Brexit, which really made me sad.”

Other nominees bringing a European vein to this year’s cast of young stars included Galatéa Bellugi, a French actress who recently shot a superhero movie in Italian, a sequel to Gabriele Salvatores’ “Invisible Boy” and David Murgia, the Belgian actor nominated for “The First, The Last.”

Sporting a smart black tuxedo, Chanel No. 5 ambassador Depp headed straight for the screening area to watch a short film the nominees had shot with director Valérie Donzelli. The film shows the 34 young talents playing soccer in a park, while voiceovers clue us in to their aspirations and intimate thoughts.

“I wanted to show their personalities during their pivotal period, at their artistic beginnings,” said Donzelli. “Doing something physical keeps them from thinking about their performance. The façade falls away and the natural comes back into place.”

In an adjoining room, Chaumet displayed posters from some of the movies for which it had loaned out jewels — including 1998’s “Place Vendôme,” starring Catherine Deneuve. On Wednesday, Chaumet will welcome members of public for a talk on jewelry and cinema with the film’s director, Nicole Garcia, and actress Bérénice Bejo.

Oulaya Amamra — a favorite for the prize since her starring role in “Divines” — clung tightly to the hand of her sister, the film’s director Houda Benyamina. So tightly, in fact, that another guest nearly fell over when he tried passing between the pair.

“At first we were worried about damaging our relationship,” Amamra said about working with her sister. “But on set, she’s the director, and at home, my sister. We know the difference.”

Following the champagne reception in Chaumet’s gilded receptions rooms, the actors, directors and their agents headed to the neighboring Hôtel Le Meurice for a three-course dinner by Michelin-starred chef Alain Ducasse.

Directors took turns toasting each of the young talents, many of whom fled their tables at the earliest chance in favor of the smoking porch.

While some of the young artists are already well established — such as Depp or the Franco-Canadian Niels Schneider, who starred in Xavier Dolan’s breakout picture “I Killed My Mother” in 2009 — the nomination still provides a welcome career boost.

“There’s still a kind of trampoline effect that is desirable,” said Nathalie Baye, whose Hollywood credits include “Catch Me If You Can,” noting that some people were still asking who Schneider was when they arrived at the party.