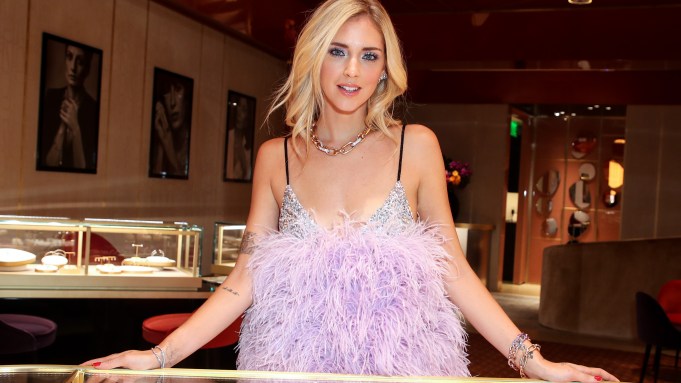 Chiara Ferragni capped off her latest soujourn to Los Angeles by hosting the opening of Pomellato’s newest boutique, on Rodeo Drive in Beverly Hills, on Tuesday night. The superinfluencer took a few moments to chat with WWD about what’s in store for her brand.

WWD: Why did you sign on as the face of Pomellato’s campaign?
Chiara Ferragni: I love Pomellato, I remember my mom always wearing their jewels so I grew up with the brand. It’s Italian, from Milano, so it really spoke to me.

WWD: How was the shoot?
C.F.: We shot in December with Peter Lindbergh in Paris and I was six-and-a-half, seven months pregnant at the time, but we cropped all the photos. It was insane. I had never shot with him before and everything was perfect. We shot everything with natural light and it was so amazing, it didn’t need to be retouched. I loved the styling, I felt it was accessorized in the way I would do it, so it was very personalized.

WWD: A lot has happened since your last visit to L.A.
C.F.: The last time I was in L.A. was in April [for the Attico party] and I had just had my baby. My life has changed so much in 2018: I had my first baby, I got married, and I am the chief executive officer of The Blonde Salad, and I recently became the ceo of Chiara Ferragni Collections as well. Between the two companies we are more than 25 people now. We have some news coming up, and we are also filming a documentary.

WWD: Tell us more about the documentary.
C.F.: It’s going to be out in about a year. It’s been filming since my wedding [in August], so it’s been a few months now. We are shooting in Milan, L.A., New York for the next month. It’s going to be a good way to show how much social media has changed the whole fashion world and how I’m creating a business out of that.

WWD: Who’s directing it?
C.F.: The director is an Italian woman, Elisa Amoruso. She’s done a lot of documentaries from the woman’s point of view, and she can really understand all my gestures and what I’m saying all the time. The director of photography is also a woman, so it’s a great team.

WWD: What is your dream for your brand?
C.F.: I really want Chiara Ferragni to become a really big brand. We already have stores in Milan and we recently opened in Paris and China. My dream is to have my stores everywhere.

I also want to continue to work with other brands and the idea is that it won’t just be the say of the brand, but the goal is we can decide together what we create and what types of project really work for my audience. I think that’s the best way and the brands that we work with are really interested in that style.