The brand staged its first Los Angeles runway show at the Brody House. 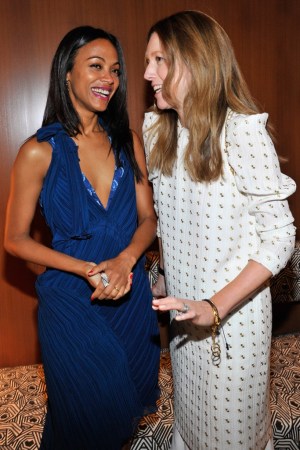 Chloé staged its first Los Angeles runway show on Tuesday night, showcasing its spring collection at the Brody House, a midcentury A. Quincy Jones residence in Holmby Hills just a stone’s throw from the Playboy Mansion.

“For me, I’m a huge fan of the West Coast of America and I really felt like we hadn’t made a presence here for a long time,” said creative director Clare Waight Keller.

“It’s quite easy to host things at Chateau Marmont but I wanted to do something unique. I love architecture so I was excited about being in the space because it felt very personal.”

Cohost January Jones met Waight Keller on the receiving line. “I’ve loved Chloé for a long time and with this collection I was especially [pleased] to meet Clare,” the actress said. “It felt very classic with an edge to it which I really responded to. And I picked my favorite dress and they let me wear it.”

“What is this place?” Mandy Moore asked as she took it all in. “I’m guessing it’s what, $25 mil?” She was correct in the last buying price, but the manse is currently on the market for twice that.

After guests were seated in the atrium and two living rooms, models paraded through the house, then the crowd adjourned to the kitchen and great room for oysters and charcuterie before “It” girl band Haim took the stage on the patio.

“I really love Chloé, but I was even more excited to see Haim,” said Alison Brie, who is friends with the sisters via their producer, who also happens to write the music for her show “Community.”

A puddle of models and actresses formed on the floor in front of the sliding doors to the patio, with many recording the show for posterity on their iPhones.

“I finally found a spot to dance and they were like, ‘Thank you and good night,’’’ said a disappointed Heathcote afterwards. “It’s not like I could stand up in front of everyone who already staked a place on the floor. They’d be like, ‘F you, get out of the way!’”