The actress was a childhood friend of the evening’s honoree, Terrence Meck, founder and executive director of The Palette Fund. 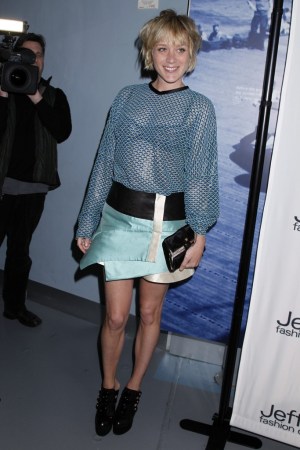 Chloë Sevigny served as honorary chair of the ninth annual Jeffrey Fashion Cares fund-raiser on Monday in New York. The actress was a childhood friend of the evening’s honoree, Terrence Meck, founder and executive director of The Palette Fund.

“His older sister was in my class and I knew him and we did musicals together,” recalled Sevigny, as she strolled the crowded decks of the Intrepid Sea, Air and Space Museum docked on the Hudson River. “He might have been the first openly gay boy I ever knew — although I’m not sure he was out.”

“I’m still just enjoying that I got the cover because it’s definitely surreal to me,” said Upton, who since her star turn in the Sports Illustrated swimsuit issue has been tapped for Carl’s Jr., Skullcandy and Zoo York campaigns. “It’s been a whirlwind but so exciting.”