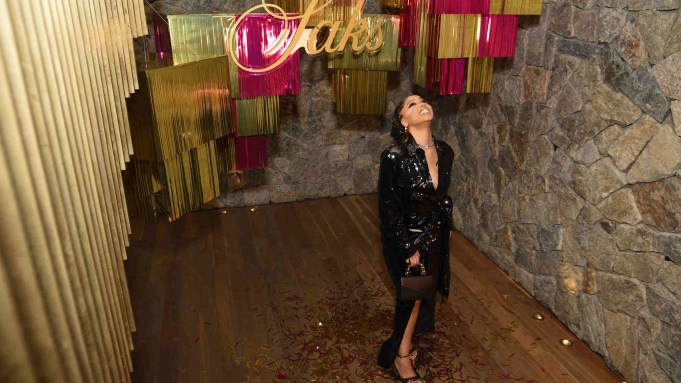 For anyone looking to keep the memory of New York Fashion Week alive year-round, Saks had just the accessory on offer: a permanent tattoo.

The retailer hosted its NYFW celebration at L’Avenue at Saks on Thursday night, welcoming a crowd of designers, customers and other VIPs to kick off the start of the new fashion season. Downstairs, celebrity tattoo artist JonBoy was manning a tattoo pop-up; design options on the menu included the “Saks” logo. Would anyone opt to show their commitment to Saks with some ink? The night was young, and time would tell.

“I’m going to try to convince someone [to get it],” JonBoy said. “I’m gonna be like, it’s all sold out — this is the only [design] that’s available.”

The tattoo artist noted that classic designs — stars, dots, hearts — are the most popular choices during previous event pop-ups. “I never thought a tattoo artist could work in a space like this and work with people in fashion,” he added. “It’s cool that the fashion world has accepted and welcomed someone like me into it.”

Nearby, Saks fall campaign face Chloe Bailey was posing on the downstairs step-and-repeat as a staffer tossed confetti from a bucket above. Later, the singer took the floor to perform a short solo set for the crowd.

“We want to make sure who we’re featuring in the campaign talks to a lot of different elements of what’s happening right now out there [in the world], and Chloe has a lot,” said Saks chief executive officer Marc Metrick. “She’s so creative — it’s the music, it’s the acting, she’s about to break out do something solo. She’s beautiful and she wears the fashion really well, and she’s so representative of what’s happening out there with the customer.”

Upstairs at L’Avenue, servers were circulating the room offering guests Lysol wipes and bumps of caviar. The Champagne was flowing, and guests sipped themed cocktails, including a spicy margarita coined the “Saks in the City.”

“I’m on the board of Saks, so I’m happy that we can have such a beautiful event at our establishment, a lot of beautiful people, a lot of well dressed people. I’m just excited to be here,” said Harden, adding that his fashion week plans were up in the air — although he’ll be stopping by the Fendi show on Friday night. “I literally just landed, so I’ll definitely check out a couple of shows before I go to Philly. I can’t wait.”