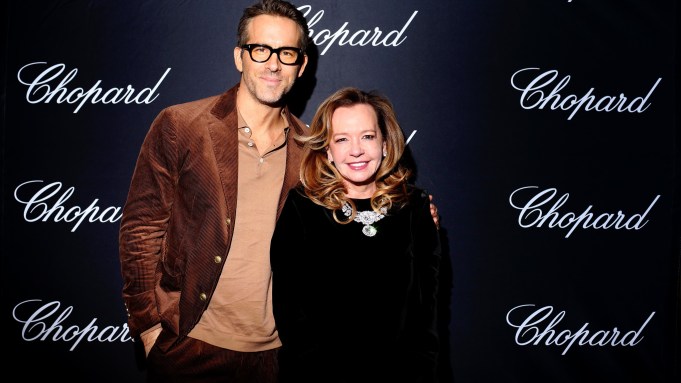 She has worked with movie productions, actors and actresses and Disney on partnerships, and she is responsible for the Swiss company’s 20-plus year sponsorship of the Cannes film festival, as well as the design of the Palme d’Or, the top prize awarded there, which went to “Parasite” this year. “I loved cinema since I was a kid, and the Disney movies,” she said.

So when the opportunity to partner with Netflix on its new film “6 Underground” presented itself, she was excited. “We’re used to Hollywood but not really with Netflix,” she said. “It’s another dimension.”

The new film by Michael Bay stars Ryan Reynolds as “One,” a multibillionaire tech genius who assembles a team to go toe-to-toe with dictatorships and stop global injustices. The film also stars Corey Hawkins of “Straight Outta Compton” and upcoming 2020 film “In the Heights” and Dave Franco of “The Disaster Artist,” and features Chopard jewelry and watches.

Reynolds, in the film, wears the Mille Miglia GTS Power Control Grigio Speciale and the Mille Miglia Classic Chronograph watches suited for his billionaire character. A special Mille Miglia Racing Colours chronograph with yellow dial is worn by “Five,” played by actress Adria Arjona, and a necklace from the Garden of Kalahari collection appears in a chase sequence involving the character “Four,” played by “Bohemian Rhapsody” actor Ben Hardy.

“It has to fit, it has to look organic,” said Scheufele about picking the right pieces for the film. “Obviously they have to fit the scenario, the character, the whole story. Sometimes you see some things and it’s not really right. It has to fit the brand and we do a lot with car racing so it’s action and it’s also about the characters.”

Scheufele said she first met with the Netflix owners in Cannes and discussed a potential partnership. The company had seen the general script for “6 Underground” before partnering on the picture. “First of all, we’re all big fans, and the cast is incredible,” she said. “Everything we do is more passion. It’s not strategic,” she said. “And I’m a big fan of Ryan Reynolds.”

She also hosted a dinner with Reynolds at Catch Steak after the premiere and said seeing the exhilarating film fixed her jet lag (she had just traveled through much of Asia prior to arriving in New York City for the event). Other guests at the intimate dinner included David Foster and Katherine McPhee, and the Chopard pieces that appeared in the film.

Chopard pieces will return on the silver screen in “No Time to Die,” premiering in April 2020. “We’re in the next 007 with the jewelry,” Scheufele said.

She commented on the partnership, “Everybody likes James Bond and it’s a family-owned franchise. We were talking some years ago and they reached out to us. It’s actually a very cool project, and I’ve seen some of the scenes.”

Barton Perreira Debuts 007 Eyewear Capsule for ‘No Time to Die’