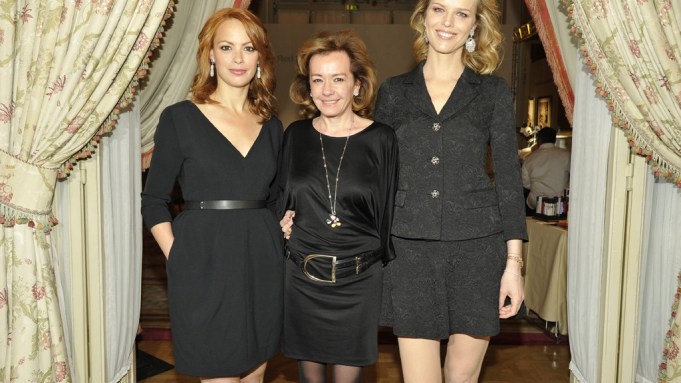 PARIS — Chopard is pulling out all the stops to make its presence at this year’s Cannes Film Festival one to remember.

The brand is marking its 15th year as the festival’s official sponsor.

To build buzz around the celebratory events planned, the company transported elements of its jewelry workshops to a salon at the iconic Ritz hotel here last Wednesday, inviting guests including its ambassadors for the festival, Eva Herzigova and Bérénice Bejo, to get a look behind the scenes at the craftsmen working on this year’s Red Carpet Collection of 65 colorful and eclectic fine jewelry pieces designed to be worn in Cannes.

“We have a wide spectrum of different colors and styles, from very classical pieces to very extravagant pieces to very colorful pieces,” Chopard co-president and creative director Caroline Scheufele explained.

“It’s really like a rainbow, like the actresses going to Cannes, because you have all nationalities, ages, religions and cultures, and it reflects this.”

Scheufele’s personal favorite, she said, is an imposing necklace featuring stones in graded shades and colors composed of amethysts, kunzites, rubellites, spinels, pink sapphires and diamonds crowned with a 69.7-carat pear-cut tanzanite that was being worked on by the house’s artisans during the event.

“I think it will attract a lot of people but I’m sure it would go very well on Penélope Cruz, because she loves those shades,” Scheufele revealed.

Another key piece in the collection is the Marilyn Monroe necklace, to be worn by Herzigova, one of Scheufele’s friends, on the festival’s opening night on May 16.

Herzigova was spotted admiring handiwork on the cascade of diamonds, briolettes and brilliants set in white gold, while Bejo, who confessed to not wearing much jewelry in everyday life, said her favorite was a pair of rose cut diamond creole earrings.

The tribute to Marilyn is intended to mark the 50th anniversary of the iconic actress’ death.

For the event, Chopard has acquired a collection of 25 unseen photographs of the star taken in her early years between 1953 and 1956 by Milton H. Greene, which it will show during the festival in a special exhibition.

“We will be giving one or two of them to AmfAR for the auction,” she said, speaking of the AIDS benefit to be held on May 24 at the Eden Roc hotel, for which the brand is co-sponsor.

The highlight of Chopard’s sparkling fortnight will be a “mystery” evening held in partnership with Harvey Weinstein on May 21. “The location is secret, even to the guests,” Scheufele said.

“They won’t know until the last minute, when they get picked up. I can’t even tell you if Uggie will be there,” she said, referring to the canine star of “The Artist” who, like co-star Bejo, wore Chopard to the Oscars.

On March 17, the maison will host the Trophée Chopard, which celebrates the talent of two young actors each year, followed by a party in the Chopard lounge at the Hotel Martinez.

Past laureates have included Astrid Bergès-Frisbey and Marion Cotillard.

“I wanted to really do something for Cannes,” Scheufele said of her commitment to young talent. “Once you’re up there as an A-list actor, everything seems easy, but to get up there is very difficult. What we do is a kick-start.”

While Cannes has been a major event in Chopard’s calendar for the past 15 years, and that is more than ever the case for 2012, the Swiss firm’s celebrations will not end with the attribution of the Palme d’Or, which it creates each year, on May 27.

In September, it will publish a book of 150 photos of its animal-inspired creations that marked its 150th anniversary in 2010, and will host accompanying exhibitions in Paris and possibly Shanghai, Scheufele said.