Celebrities including Uma Thurman and Leonardo DiCaprio attended the jeweler’s party, which featured a private concert by Robbie Williams. 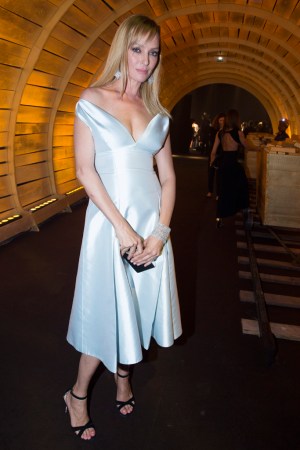 CANNES, France — Chopard celebrated the 60th anniversary of the Palme d’Or with a party in Cannes that was literally dripping in gold.

Guests including Uma Thurman, Leonardo DiCaprio, Fan Bingbing, Paris Hilton, Soonam Kapoor and Michelle Rodriguez joined a bevy of models for a private concert by Robbie Williams in a seaside tent that had been decorated to look like a goldmine, complete with carts laden with gold ingots.

Alexis Veller, the partner of Chopard co-president Caroline Scheufele, has directed a documentary called “The Legend of the Palme d’Or” featuring interviews with past winners including Martin Scorsese, Jane Campion and Quentin Tarantino. It screened in the Cannes Classics section of the Cannes Film Festival.

Since last year, the Geneva-based jewelry and watchmaker — an official partner of the event since 1988 — has manufactured the trophy from Fairmined gold.

Williams started his set with a tongue-in-cheek potted biography.

“I know there’s a lot of Americans in the audience tonight and you don’t know who I am. I’m like an obese Justin Bieber,” said the former Take That member.

“Born 1974, Aquarius – yeah, it doesn’t matter, it’s just a number – then went to school, left school, did some drugs, got fat, joined a boy band, left the boy band, went to rehab, then got drunk again, then got fat and then rejoined the boy band. You know my history. Does anybody know my history?” he asked the crowd.

Williams needn’t have worried. The well-heeled audience sang along enthusiastically to his greatest hits including “Rock DJ,” “Angels” and “She’s the One.”