He is the face of the fragrance and was, appropriately, dressed head to toe in the brand. 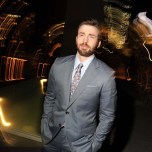 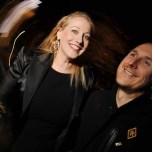 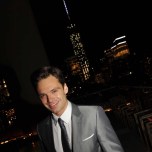 Chris Evans was at Jimmy, the rooftop bar at The James hotel in Manhattan, Monday night. He is the face of the fragrance Gucci Guilty, and he was, appropriately, dressed head to toe in the brand.

“You know what? Even though you want to say it’s because of the brand, I actually love the scent. I wear the fragrance because it’s great,” Evans said about his involvement with the scent. “I feel lucky to be a part of it, and I’m ready for someone to drag me out of it.” The men’s version of Guilty was the best-selling fragrance launch in 2013, according to The NPD Group, but the actor modestly said its success had less to do with his role than with creative director Frida Giannini.

“It’s Frida. Gucci has this existing cachet. They have Frank [Miller], Evan [Rachel Wood] and good commercials,” he said.

Earlier, on the screening’s red carpet at the Tribeca Grand Hotel, Evans and Grillo had sparred playfully, arguing about who could better pull a punch.

“Anytime you do a fight scene with Frank Grillo, you are going home with bumps and bruises,” said Evans, softening his jab with a compliment. “Frank is the guy who is willing to go home with ice packs to make this movie look authentic.”

Grillo’s response? “I’m not Captain America. I have a lot to prove.”