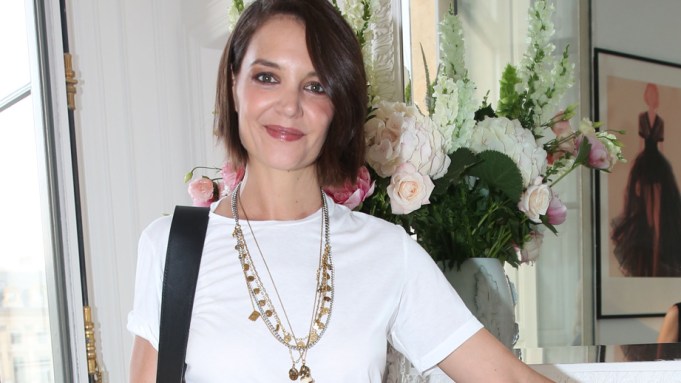 “It’s incredible to be here, with the Ritz right there — and it is just the center of it all. It’s amazing,” said Katie Holmes, standing in Maison Christian Dior’s dining room with its sweeping views of the Place Vendôme. “I feel like it’s such a historical place for Dior, and I feel it is so special to be here.”

“Well, you know they say a good home makes you feel like it’s your own, and it seems like all of us could easily move in tonight,” said DJ Mia Moretti. “We all seem to think that we’ve been given the keys.”

Guests at the dinner on Monday night — who included Kate Bosworth, Sofia Boutella, Kathryn Newton, Annabelle Wallis and Tina Kunakey, all fresh from Dior’s couture show earlier in the day — may not have been given the aforementioned keys. But they were able to try out Maison Christian Dior products, including perfumes, soaps and candles created by the house’s perfumer-creator François Demachy. These were on display up one flight of winding stairs.

People could also taste the fragrances, in a sense, too. Chef Jean Imbert conceived the meal made of six courses, each nodding to a different Dior fragrance. Balade Sauvage, for instance, was translated gastronomically into a flower-and-herb, tomato water, bergamot and goat cheese dish.

Dior’s quintessentially elegant Parisian apartment artfully mixes old and new decor, and is full of art, to showcase the Maison Christian Dior product offering and its retail concept that started rolling out a year ago.

Margaret Qualley was entranced by the location as well as by the perfumes she tested. In general, when it comes to scents, she said: “I’m very cheap, honestly. I’m super frugal. I go to Whole Foods and buy essential oils, and I call it a day. But all the ones upstairs were superlovely.”

After a hiatus, Qualley is dancing again, taking classes at Ryan Heffington’s studio.

Emma Roberts has just finished filming a movie in Spain, called “Paradise Hills.” “It is with an amazing cast of women that I am so excited I got to work with — Milla Jovovich, Danielle Macdonald, Eiza González and then one boy, Jeremy Irvine, who is amazing,” she said.

The actress explained the film is set in the near future, at a time when young women are sent to a reform school if they are noncompliant. “Like, if a girl doesn’t want to get married,” Roberts said. “You’ve got to be sent to this school to be ‘fixed.’ And so my character and her friends try to escape. It was really fun.”

Zoey Deutch had two movies come out the same day this year. There was “The Year of Spectacular Men” — a family affair that she and her father produced, her mother directed and her sister wrote, starred in and scored. “That was really as grassroots and as personal as it gets,” she said, calling it also “really rewarding.”

“Set It Up” costars Glen Powell, with whom Deutch was in a Richard Linklater film four years ago. “We were like: ‘We want to make another movie together. We want to find a great, funny updated rom-com.’ And we did it.”