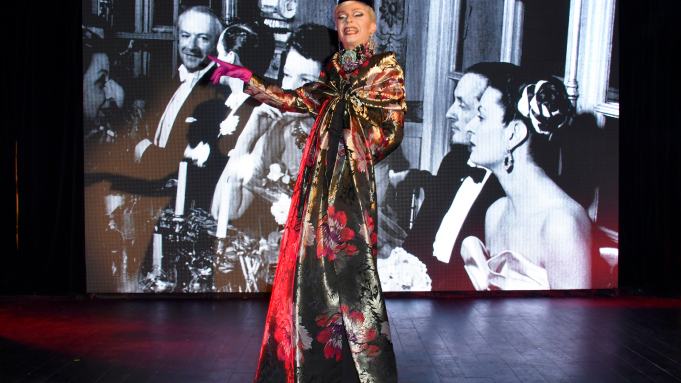 PARIS — The Christian Lacroix brand celebrated its 30th anniversary on Wednesday with a cabaret-themed party at Peruvian restaurant Manko.

The occasion was mainly an opportunity for the house to acknowledge its partners, who have helped it develop a licensed business in men’s wear, accessories and homewares since its couture and women’s ready-to-wear divisions folded in 2009.

“Tonight, we really want to thank the people who have been by our side for the last seven years. It wasn’t easy in the beginning,” said Nicolas Topiol, chief executive officer of Christian Lacroix. “The idea of a cabaret is perfectly in tune with Lacroix — it’s a house of openness, freedom and diversity.”

Sacha Walckhoff, the label’s creative director, concocted a menu of performances featuring Laurent “Lola” Mercier, the female impersonator and former head of couture at Balmain, who like him hails from the Swiss city of Lausanne.

“We’ve known each other practically since we were teenagers,” Walckhoff said. “It’s the first time in almost 40 years that we’ve done something together.”

The evening also featured singing by Brian Kenny, the New York-based multimedia artist who designed the art work for a capsule collection of products celebrating the Lacroix milestone. A trained opera singer, he performed while Regina Demina, who features in the look book for the collection, did a pole dance.

Among the guests were Lucia Mantero, brand manager of Mantero Silk, which has been working on scarves for Lacroix on and off for two decades.

“What I love the most is going to Paris to their office and listening to Sacha talk about how he developed the collection,” she said. “It’s not like that with all our customers. There are situations where you don’t have that kind of communication.”

Bertrand Guyon, creative director of Schiaparelli, took the opportunity to catch up with some former colleagues. “I spent 10 years at Lacroix,” he said. “It’s both fun and a little nostalgic.”