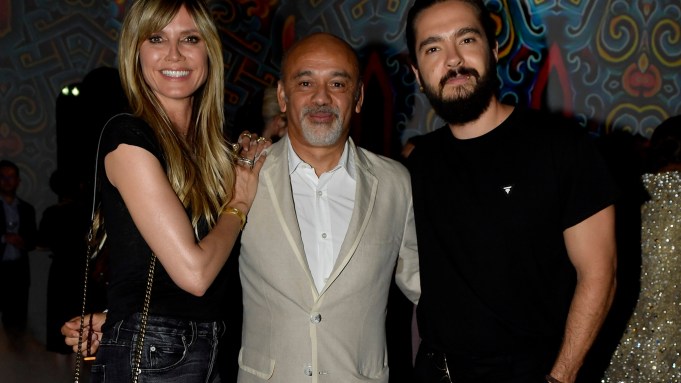 ESCAPE TO BHUTAN: There were no horses in sight upon arriving at the French Republican Guard on Tuesday, but rather a completely different means of transportation.

For the presentation of his spring 2020 collection, Christian Louboutin turned the Manège Baptisti into the “LouBouthan Express,” a makeshift train paying homage to the country of Bhutan, the collection’s main inspiration.

British actress Ellie Bamber was sitting at one of the train’s tables with friends, sipping Champagne and toasting the designer as he made his way along the carriages to greet the steady flow of guests, including Heidi Klum and Tom Kaulitz, Mandy Moore, Olivia Palermo, Audrey Marnay and Rossy de Palma.

“I feel like I’m on holiday,” said the Spanish actress, who was fittingly kitted out for the occasion, wearing a black straw hat, shorts and studded Christian Louboutin trainers, waving a feathered black fan.

In a smoke-filled room behind the LouBouthan Express where pieces from his spring 2020 collection were shown, Louboutin himself was sporting an ornate pair of leather boots, traditional Bhutanese footwear that were a gift from friends living in Thimphou, the capital of Bhutan.

“I have a great love story with this country,” said the designer, who decorated some of his signature platform heels with clouds and swirling mist illustrations in reference to the South-Asian country’s mountains.

These five pieces, which feature hand-sculpted and hand-painted wood platforms inspired by Bhutanese architecture, are part of a capsule collection produced in collaboration with the students of the School of the 13 Royal Arts and Crafts of Thimphou, and took six years to be developed.

“I would love for people to understand that Bhutan is a beautiful, colorful and happy country,” said the designer. “And that when we talk about craftsmanship, it’s not just something traditional and a bit boring. Craftsmanship creates links between people — it’s always in evolution and progression, contrary to what is believed. It’s always in movement.”