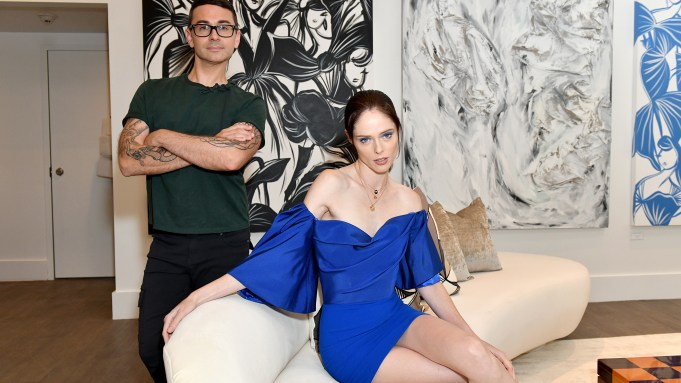 “You can have anything you want at any time you want in New York City, but here is something really charming about the communities we are in, and how they enjoy and appreciate fashion and the arts,” explained supermodel Coco Rocha, who joined Laura Linney, Debra Messing, Katie Holmes and other friends of the brand in feting designer Christian Siriano’s The Collective West store Tuesday in Westport, Connecticut.

Siriano has been a resident of the state for nearly 10 years, the last two spent in Westport, and thought it the perfect place for his next chapter in brick-and-mortar retail. “The Westport lady is a bit more casual,“ he said. “We wanted to bring her a bit of glamour. Get her out of her Lululemon and into… something cooler.”

Located at 940 Post Road East, the award-winning designer has created his take on a mini department store, housing not only his complete line of ready-to-wear, accessories, interiors and his art, but also a collection of shops-in-shop for a mix of young brands that Siriano curated himself, including Swoon Westport, Josh Levkoff Jewelry, Irene Lummertz Jewelry, Snif, Eny Parker, Bleusalt, Franny’s Farmacy, Bungalow’s Decor and Future Lovers of Tomorrow.

“Everything in here are just beautiful things I love,” he said point blank, while breezing through the store space. “I picked things that I thought complemented but didn’t compete with anything else here,” he said, adding that the younger brands he sells have in-shop leases for a year, with Siriano taking no cut of their profits. “We don’t take commission, honestly that the was problem with the department-store world. I really want each brand to be successful. They make what they make.”

Siriano joked that the space has had many lives before he came along. It took three months to build out, but it has been transformed into an open and inviting space with a mix of furnishings from his own interior line mixed with antique pieces he sourced and walls of his paintings, all creating a gallery-like vibe full of textural accents and pops of color.

For his ready-to-wear collection, the space will house limited runs on his creations, a business model he pivoted to over the last year. “We make a lot of collections but I don’t feel like we make make a lot of product,” he said, reporting that smaller direct-to-consumer business model is working for him, “rather than making 10,000 units of one dress, when a woman buys a piece she is probably only one of 10 women who own that exact dress,” he said, adding that a huge part of his business comes from his trademark custom pieces.

In September 2020, Siriano invited some 80 guests to the backyard of his Westport home to show his spring 2021 collection, and from the looks of things the new store space could be up next. “We can move the furniture out of here and do lots of things, including a runway show,” Siriano quipped, saying it’s “a multipurpose space.”

“It’s no secret that the underlining theme through Christian’s career has been inclusivity,“ said Rocha, who moved to the suburbs of New York shortly after Siriano did. “He always wants to make people feel included. This store, bringing together his love of fashion, art, decor and people, is just another fabulous example of that.“