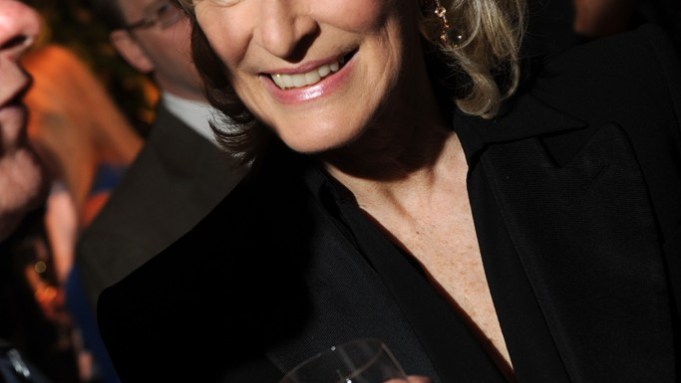 The step and repeat was a hedgerow at Christie’s on Wednesday night for the auction house’s third annual Bid to Save the Earth Green Auction.

“It was a little bit busy last year with Vogue and the Runway to Green event,” co-chair Susan Rockefeller mused of the event. “This year, I think it will be a much more contained, focused event — the focus being water rather than this overarching ‘save the earth’ idea. For example, look at the [Natural Resources Defense Council] initiative, Clean by Design, which is how the fashion industry can begin working with factories in China to minimize water usage.”

Clean water preservation is a cause close to Rockefeller’s heart. The philanthropist has a short film named “Mission of Mermaids” making its debut in early June.

“It’s a poetic ode to the ocean, my voice and words over found footage from the Internet and a day and a half of shooting out in Long Island,” she said of the film.

Christie’s auctioneer Lydia Fenet was enthusiastic about the evening ahead.

“The party is more streamlined this year, though every year it gets bigger and bigger,” she said. “It’s like building blocks. Last year we had Nicki Minaj performing, and it was really before anyone knew who she was. I remember people asking, ‘Is that Rihanna?’ and now look. So I’m excited for Grace [Potter, of Grace Potter and the Nocturnals.] I told her, ‘We launched Nicki Minaj, you won’t regret playing tonight.’ ”

Coco Rocha mugged for photog­raphers, and appropriately so. She had donated a lesson in “posing and fashion movement” to the auction.

“I’m going to give it the full serious coaching routine,” the model grinned. “Like — here, yes, no, go. I’m going to be very strict.”

And does she consider herself to be environmentally conscious?