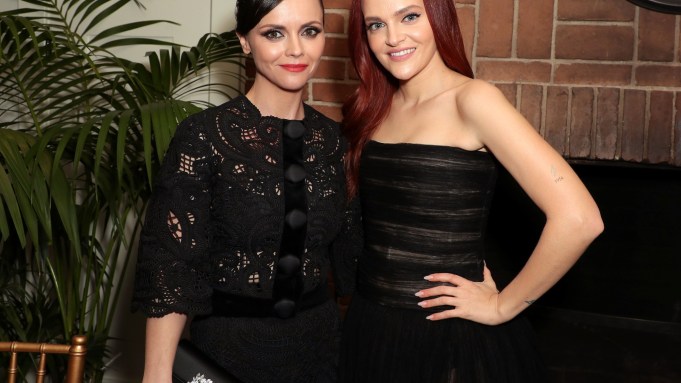 Roger Vivier first entered the pop culture pantheon on the heels of Catherine Deneuve in the 1967 film “Belle de Jour.” Now, creative director Gherardo Felloni is adding a new chapter to the brand’s Hollywood script with his third short film, “Abracashoes,” starring Christina Ricci and Dianna Agron, which he premiered Thursday night over dinner at — where else? — the Chateau Marmont.

“He has a fun, Dali-esque sense about him,” Ricci said of Felloni, who came up with the concept for the film, in which she plays a magician turned shoe thief. The mustachioed, Italian-born designer even has a cameo. “I told him we should do a whole series about the Vivier thief — and he can play the detective!”

Ricci said she was impressed by Felloni’s love of Italian and French cinema, and his reverence for the artistry of the Vivier brand — so much so, that she tapped him to make a dress for her to wear on Oscar night. “It’s my first time designing clothing,” said Felloni, who is rooting for “Joker” and “Judy.”

He’s loved Ricci since he first saw her in the 1990 film “Mermaids.” She’s always a little dark,” he said of his latest leading lady, who came to Milan to film the short over two days in December at Teatro Gerolamo. “This film is the first to speak about the Belle Vivier,” he explained, noting that he was inspired by the obsession women have for the classic shoes. “We have clients who have 200 or 300 pairs in their collection.”

The dinner drew a crowd of dressed-up fashion fans, including Susan Sarandon, AnnaSophia Robb, Indya Moore, Gia Coppola, Sydney Sweeney, Betty Who, Jaime King, jewelry designer Lisa Eisner and stylists Elizabeth Stewart and Erica Cloud, all decked out in Vivier — and each place sitting had one of the magicians’ top hats.

“Abracashoes” is the third film Felloni has made since joining the brand in 2018. The first was with Deneuve and the second with Sarandon, who came out Thursday night wearing Vivier tartan boots with a giant crystal strass buckle. “I’m trying to decide if I can really wear these in New York with jeans!” quipped the consummate New Yorker, fresh off the plane from Tuesday night’s Museum of Modern Art’s Women in Motion screening of the groundbreaking 1991 feminist film, “Thelma & Louise.” “A lot of the credit for it becoming so iconic is [director] Ridley [Scott’s] choice of that vista.…In reading the script, you wouldn’t have had to go there. It could have been done small, but he made it heroic,” she said of the famous finale.

A star of today’s groundbreaking feminist show “Handmaid’s Tale,” actress Madeline Brewer reflected on how she picks herself up after shooting the Hulu show’s heavy material. “I take a bath and I drink wine!” she laughed. “It is excising a lot of feelings I have about the world we live in now, and I can feel empowered doing it and making it. But I don’t understand how Elisabeth [Moss] does it,” she continued. “She will do this gut-wrenching scene and then the next minute she’s online shopping!”

For shoes, perhaps? Brewer mused on the passion for fashion when describing her look for the evening: a black strapless Khaite dress, a serious cat-eye and Vivier Marlene sandals — her “b—hy shoes,” she said. “They make you feel like a boss!”