Laura Carmichael, Erin O'Connor and David Downton were among guests at a cocktail and dinner. 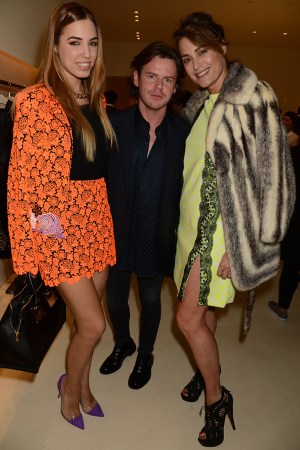 NOW AND THEN: “I thought he wanted advice from an old man. I had no idea he wanted me to do the job,” said John Pawson, the minimalist architect who designed Christopher Kane’s new store on Mount Street in Mayfair. “There I was, thinking ‘Who can I recommend?’ I was so flattered he chose me.”

Pawson clearly has some CK karma going on: He made a splash in fashion years ago, designing the new look Calvin Klein store in New York. “We knew we were in safe hands,” said Tammy Kane, the designer’s sister, business partner and deputy creative director.

Nicholas Kirkwood, whose shop is next door, said he kept poking his head in to check on the store’s progress. While Kirkwood’s shop will remain on Mount Street, the shoe guru is set to move his studio and offices to the Vinyl Factory in London’s Soho later this year, when he’ll also be marking his 10-year anniversary in the business.

Actress Laura Carmichael, meanwhile, is time traveling via wardrobe changes. “I’m finishing a comedy called ‘Burn, Burn, Burn’ about two girlfriends on a road trip. And I get to wear modern clothes!” she said, adding that she’s filming the sixth series of “Downton Abbey” — where she’s back in 1925. “Admittedly, the clothes aren’t as comfortable, “but they’re so beautiful,” she said.