London Designers Kick Back at The Richmond’s Summer Party

Christopher Kane, Richard Nicoll and the Peter Pilotto designers were all in attendance. 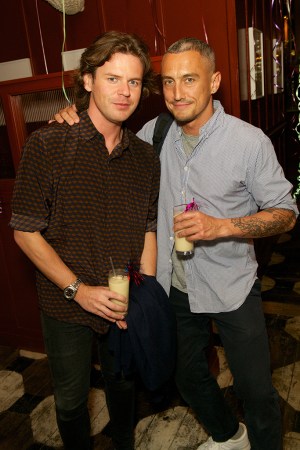 FASHIONABLY LOCAL: “Tonight is really fun, it feels a bit like a house party,” said Richard Nicoll, who was one of the fashion names — among them Christopher Kane, Peter Pilotto and his design partner Christopher De Vos — who hit East London restaurant The Richmond Thursday night for its summer party.

The restaurant and bar, which opened this spring, specializes in raw seafood, such as tartares and carpaccios, alongside oysters sourced from Essex, Scotland and Northumberland.

Nicoll, who is a frequent visitor, said it has “kind of a ‘Cheers’ vibe to it,” thanks to its crowd of regulars. But unlike the sitcom bar, the restaurant — which is run by chef Brett Redman and stylist Margaret Crow — lures a fashion-forward crowd. Kane, another guest at the party, said he comes to the restaurant for its “amazing drinks [and] great atmosphere. I think what they’ve done with it is so nice — it’s like an updated version of J. Sheekey,” he said, referring to the famous fish restaurant in London’s West End. The designer also chatted about his summer plans, after having shown his resort and men’s collections in London. “I’m going to Positano in July and then Mykonos, and then maybe Formentera,” said Kane, but noted that it wouldn’t be all play. “I’ve got work in between and before,” he said.

During the party, guests nibbled on canapés such as crab on sourdough, chargrilled octopus and oysters, while a string of stylish DJs including Harriet Verney — a niece of the late Isabella Blow — were on the decks.