For the occasion, Moynat had flown in Tae-in Song, one of the artists responsible for painting its customizable features onto bags.

By Misty White Sidell on May 4, 2016
View Slideshow 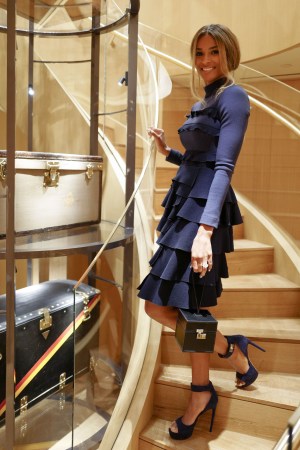 While one would expect that the fashion industry and its associated celebrity acts would be exhausted the evening following the Met Gala — lazily stationed on their couches clad in pajamas — think again. In a bid to capitalize on the folks in town, a suite of brands hosted parties Tuesday night. Among them was Moynat, which toasted the opening of its Madison Avenue store and collaboration with artist Daniel Arsham on the roof of the former Whitney Townhouses, where it occupies a retail space at ground level.

Upstairs, Claire Distenfeld, Nicoletta Santoro, Ian Bradley and Thierry Lasry mingled outdoors amid some hazy weather, while Rei Kawakubo and husband-business partner Adrian Joffe were there early in the evening.

“A lot of the people you see around you are customers [of the Madison Avenue store]. It’s so touching and good for us to see our bags being worn in town,” creative director Ramesh Nair said of the six-week-old boutique’s quickly mounting audience.

For the occasion, Moynat had flown in Tae-in Song, one of the artists responsible for painting its customizable features onto bags. But rather than etching letters and insignias as she typically would, the Beaux Arts-trained Song was taking Arsham’s signature dark humor for a spin — transposing the facsimiles of Orbit gum wrappers and carabiners onto Moynat’s monogrammed totes.

“She is an expert at painting on this material, otherwise I’d be doing it. It’s very technical and is all about layering. It’s a much more labor-intensive process than what I use, and it’s not one I’d want to repeat,” Arsham said of the handiwork at play.

Downstairs in the store, Ciara appeared, having shed the silver wig that she had paired with an H&M gown the night prior. A poised presence, she said of the brand: “I’m a new fan of Moynat, I got to go to the store in Paris and see the history. The fact that it was started by a woman is so huge and very inspiring.”