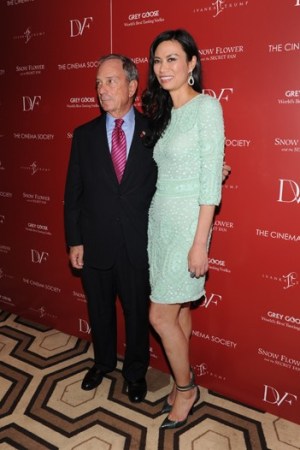 News of the World meltdown or not, Wendi Murdoch was all smiles at the Cinema Society screening of the film “Snow Flower and the Secret Fan” on Wednesday night, cozying up to New York City Mayor Michael Bloomberg on the red carpet. Any discussion of her absent husband, whose Twentieth Century Fox released the film, was relegated to whispers behind hands or employment of the occasional decorative fans host Diane von Furstenberg had topped tables with at the after party in her Meatpacking District studio.

“Rupert Murdoch? Putting out fires in London, I’d imagine…” one reveler coughed into their cocktail.

Mrs. Murdoch wasn’t the only guest present with obvious family concerns at play. A very-pregnant Ivanka Trump co-hosted the party, where she showed off what she dubbed a “friendship bracelet” inspired by the film that she had designed with Murdoch. Trump greeted guests including Russell Simmons, Anna Wintour, Donna Karan and Deborra-Lee Jackman at von Furstenberg’s studio before departing with husband Jared Kushner.

“My due date is tomorrow!” Trump laughed, though her heels prompted some skepticism. “I feel great! I actually worked out yesterday, I had booked my trainer and forgot about it. So that was funny. But, this is a great film and I was happy to be involved and I wanted to be here tonight. I mean, I’ll probably go to work tomorrow, too.”

A few of those who showed up to the screening at the Tribeca Grand Hotel begged out on the after party, including Nicole Kidman and Keith Urban and Roseanne Barr, but the space was still stocked with a varied collection of moviegoers. Barry Diller, Sir Ben Kingsley, Harvey Weinstein and Georgina Chapman, Olivier Theyskens and Rachel Roy were among those sampling the Asian-inspired fare at the bash. Gabourey Sidibe praised the film’s “beauty…and the way it depicted friendship, which I found to be very honest,” before stopping to chat with Gayle King and the film’s star, Li Bingbing. Famke Janssen and Desirée Rogers were among the few to witness a near collision when one partygoer swept out of the door and almost directly into a late-arriving Karen Elson.

“This is kind of a crazy party,” Munn said with a grin. “Look at this turnout. You can barely move without knocking into some brilliant figure of society or fashion or film or anything.”