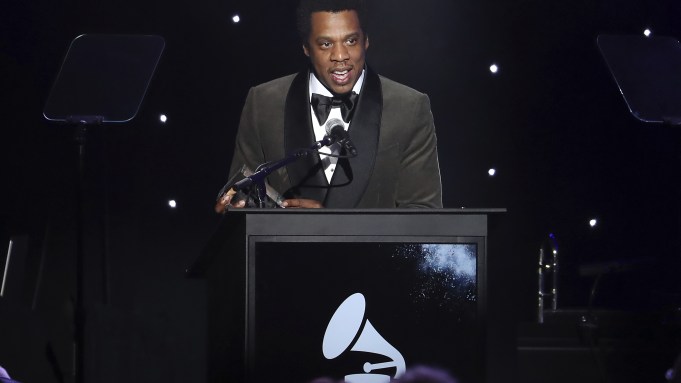 The most coveted ticket for Grammy Awards weekend may not be for Sunday’s ceremony at Madison Square Garden, but rather for Clive Davis’ annual gala. This year the exclusive event was held at the Sheraton Times Square in New York on Saturday evening. The recording industry’s elite paraded past rows of enthusiastic selfie-seekers who were camped in the hotel’s lobby before filling an expansive ballroom for the all-night affair.

“Clive’s party is legendary,” remarked musician Charles Kelley of the band Lady Antebellum, who this year is nominated for Best Country Album. “I love the energy here in New York and it couldn’t be better timing with Jay-Z being honored tonight.”

The Brooklyn native, born Shawn Carter, was on hand to receive the Industry Icon award from the Recording Academy and was surrounded by a who’s who from the world of music including wife Beyoncé. Andrew Lloyd Webber, who last week celebrated the 30th anniversary of “Phantom of the Opera” on Broadway, recalled his last encounter with Jay-Z after a horse race in Dubai.

“He’s absolutely terrific,” gushed the English composer. “Let’s not go into this, but my wife breeds horses and she had a horse in the race. He performed at the end of it all.”

Lloyd Webber also didn’t want to go into the subject matter of his current project, a musical he is writing that he describes has having “a gritty subject.” Rita Ora floated along the event’s red carpet in a white feathered Zuhair Murad gown. “I wanted to feel like a bird,” said the 27-year-old Brit. “[Jay-Z] has helped my career since I was 17 so I have a lot to give him and I’m forever grateful.”

“The city this weekend has an intense, amazing energy and we haven’t had that in New York in a while,” observed Zac Posen, who attended with model Jourdan Dunn, and was among the many New Yorkers happy to have the industry honors on the East Coast this year.

Martha Stewart, wrapped in a tawny fur coat “from Russia,” hadn’t attended Davis’ party since it was last in New York 15 years ago. “The great impresario has all of his most beautiful singers [here tonight],” she exclaimed. “I’m most looking forward to all of the performances. Maybe I can persuade Jay-Z to be on the ‘Snoop and Martha’ show.”

Actress Trudie Styler was joined by husband Sting, who is preparing to release a reggae album with Shaggy this spring. “I’ve been doing red carpets for 35 years and it’s the only time I really feel like a girl and I love it,” revealed Styler, who donned a coordinating top and pants from Prada. “It gets easier because I wear whatever I damn well want. Now there’s always an element of being a little more comfortable.”

For Mariah Carey, there was an element of discomfort when it came to her dress for the evening. The self-titled “elusive chanteuse” suffered a wardrobe malfunction during the three-hour program when a portion of her sequined gown separated. However, this did nothing to quell the songstress’ spirits as she floated around the celebrity-filled room, enthusiastically distributing air kisses. “I’m just trying to say ‘hi’ to everybody that I haven’t seen in a long time,” she explained. “Darling, you know I don’t do brunch. It’s about time for ‘linner.’ I’ll be doing that soon.”

Katie Couric introduced the host and emcee of the evening, Clive Davis, in a speech that dubbed him “the original American Idol.” “For one night only ‘Springsteen on Broadway’ is not the hottest ticket in town,” added Couric. Throughout the program, which included musical sets from Khalid, Gladys Knight, Barry Manilow, Migos, Luis Fonsi, Alicia Keys and Jennifer Hudson, Davis drew attention to the achievements of the talented artists scattered throughout the lengthy ballroom. “I try to give you a feel for who you’re sharing the evening with,” explained the 85-year-old Davis.

As a spotlight scanned the crowd, industry power players ranging from Quincy Jones, Tina Fey and Jerry Seinfeld to Rob Reiner, Hoda Kotb, Pink and Cardi B. were among those given a brief tribute by Davis. Other famous faces included Ivana Trump, Dick Cavett, Ann Curry, Gayle King, Sean Combs, Tony Danza, Jamie Foxx and Katie Holmes. The singer and actress have publicly dodged romance rumors for years, prompting Davis to remark, “If you’re going to sit together, what better night than tonight?”

“Tonight there are no winners and no losers, just the wonders of music to celebrate,” continued Davis of his 42nd annual event. Alicia Keys gave a heartfelt tribute to Jay-Z before launching into a rendition of their 2011 Grammy-wining song “Empire State of Mind,” written about their mutual hometown.

“I’ll never forget when we were doing this record and there was this moment — I don’t even know if you remember it, [Jay] — but there was this moment when we were talking and [Jay] was like ‘is this record too New York?'” recalled Keys from behind a grand piano. “We were both like, ‘yeah,’ but the thing we didn’t realize [was] it would resonate with people in a whole other way because of the hope that it represented and the possibility that it represented.”

Following Keys’ performance, which consisted of a medley of Jay-Z songs, he took the stage as the crowd chanted “HOVA,” a self-claimed pseudonym. In his acceptance speech, the rapper recalled boycotting the Grammy Awards after the Recording Academy failed to recognize fellow rapper DMX, who released two albums in 1998. “My first time coming back was six years later for the ‘Crazy in Love’ album from the great Beyoncé,” he explained, directing attention to his wife. “I realized that art is supersubjective and everyone’s doing their best and the Academy are human like we are and it’s subjective.”

The musician, whose album “4:44” is nominated for Album of the Year at Sunday night’s awards, went on to say that he is “very humbled” while noting “all the people that come before us [and] our duty to make sure that not only are we making the greatest art, but we’re upholding and supporting things that are superreal.”