Close Encounters of the Vs. Kind

Vs. Magazine celebrated their Intimate issue on Monday night with cover girl Helena Christensen and a very popular party at the Electric Room. 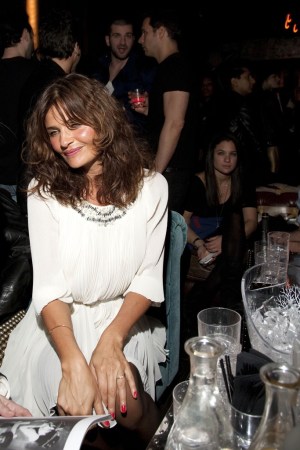 It is not uncommon to hear someone with a clipboard at the head of a queue outside a fashion-week party say that the space she guards is “at capacity.” It is uncommon, however, for this to be the truth, as it was on Monday night at the Electric Room, where Vs. Magazine celebrated its “Intimate” issue. “Am I talking to a brick wall?” one of the doormen bellowed at a bevy of waiting female guests, who were loudly weighing the probability that Kanye West would actually, as promised, appear at this party. (It was low, and he didn’t.)

It was a scrum, DJ’d by Pat Mahoney of LCD Soundsystem. Those able to squeeze through the bottleneck ambled past Vs. cover girl Helena Christensen, Nur Khan, Ally Hilfiger, Carla Gugino and Joe Jonas (who apologetically explained he “really isn’t allowed to speak to press without his publicist”) sitting behind the DJ booth. There were rumors of Michael K. Williams, Michael Pitt and Jamie Bochert ensconced near Khan, but gaining a visual proved challenging. Another security guard stood in front of the steps up to that area of seating, behind him a neon sign read: “Evil in All Things.”

On Christensen’s cover, she appears to be caught mid-costume-change, nude from behind but half in an elaborate gown. Julianne Moore, Elizabeth Olsen, Erin Wasson and Shailene Woodley also did covers for the magazine, but none was present. “Erin just texted me that she’s at a jazz bar in Chinatown,” Jenna Elizabeth said. Elizabeth shot Wasson for the cover. “Can’t say I think that was a bad choice…” she deadpanned, indicating a man wearing a patchwork cape and a fedora topped with pheasant tail feathers teetering past, his plumage raking across a few faces.

Russell Simmons perched atop a quilted leather couch, while a sequin-strewn companion asked him to take a cell-phone photo of her with the man in the pheasant-feathered hat. “It looks great,” Simmons said to her, “better than some of the ones in the magazine.” Was he feeling as harried and molested as the rest of the crowd? “Hey, it’s a good party if you’ve got a seat,” Simmons grinned, citing a friendship with ONE Management’s Scott Lipps and Christensen as being responsible for drawing him out. Cameron and Tyler Winklevoss arrived, only visible through the crowd due to their height. They headed for the bar.

“It does feel intimate, doesn’t it?” Christensen later said of the crowds, forced into physical contact with each other as they moved to and from the bar. It was certainly an interesting way to begin Valentine’s Day.