The director's annual rooftop party is becoming something of a regular event. 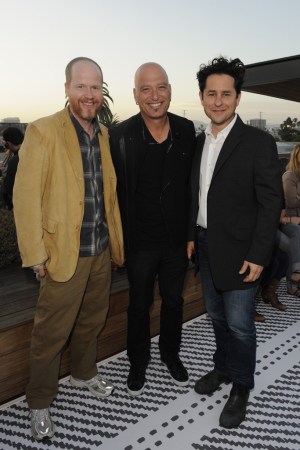 Never say never. Last year director J.J. Abrams expressed surprise at throwing a shopping party at his production company, but he and wife Katie McGrath teamed up again with Coach on Wednesday for the rooftop soiree at Bad Robot in Santa Monica, Calif., to benefit Children’s Defense Fund. “Who knows? Maybe it will become a regular thing,” he said. “Usually all we have going on up here is ping-pong,” added McGrath. The scene was decidedly more glam on Wednesday, with actresses Paula Patton, Taylor Schilling, Ali Larter, Judy Greer and Kristen Bell among those who turned out to buy handbags and sip blackberry cocktails. “This was so much fun last year, and now that I’m off for the summer, it’s time to have some fun,” said Ellen Pompeo, who is heading off for a Hawaiian holiday next week. It was back to work for Sarah Chalke, who starts filming her new series, “How to Live With Your Parents for the Rest of Your Life” this week. “Maybe I’ll learn something. When I held my son after he was born, all I could think about was how sad I’ll be when he leaves home,” she said. That day was still a ways off for pregnant actress Leonor Varela, who said, “Pregnancy is a wonderful excuse for forgetting things.” Several actors also found their way into the mix, including James Marsden, Anton Yelchin, Johnny Knoxville, Jeremy Renner and Josh Holloway.