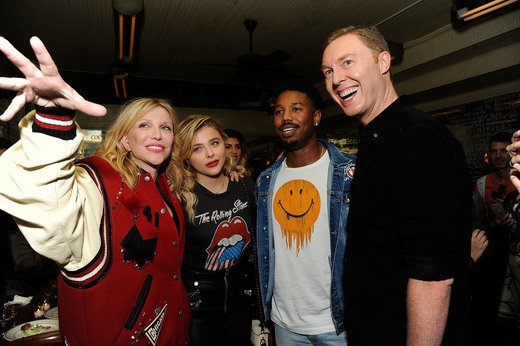 Stuart Vevers of Coach headed south to SoHo and Lucky Strike to celebrate his spring collection and new fragrance, simply called Coach the fragrance. The storied New York bistro felt like the right setting to celebrate Vevers’ collection, which was an ode to Elvis and rock ‘n’ roll, especially of the grunge genre. The queen of grunge Courtney Love was at the show and after party as well, since Vevers is a long-time admirer of her style and music. Love, who was wearing a custom Coach varsity jacket, said at the party, “It has a troll. You can’t really see it but I know it’s there.”

The two sat side by side most of the evening, sharing a cheeseburger and fries until the British designer had to greet his other supporters.

Chloë Grace Moretz, dressed in Coach leather pants and and vintage Rolling Stones T-shirt, was there with mom Teri Duke Moretz. “Scream Queen” Emma Roberts took a break from filming in L.A. to attend. The actress, who said that by midnight she would turn into a pumpkin on her flight back to L.A., said she was looking forward to working with Kirstie Alley later this week, who would be appearing on the show for the first time.

Gucci face Petra Collins and pal Rowan Blanchard of “Girl Meets World” hammed it up for the photo booth and discussed the recent cover shoot the model photographed of Kim Kardashian for Wonderland. Collins, who started her photo career with Tavi Gevinson at Rookie magazine, said of the saucy bridal shoot, “Kim really liked it. She hadn’t done a look like this before.”

Michael B. Jordan was on hand with a crew of friends, including his trainer Corey Calliet, the man charged with whipping the actor back into superhero shape for the upcoming “Black Panther” film. Jordan said first and foremost, Calliet’s job is to wake him up.

As the crowd settled down, Vevers sat down for a proper meal with mom Barbara Smith and her husband Peter in from Doncaster, England, before hitting post-show design meetings Wednesday morning.