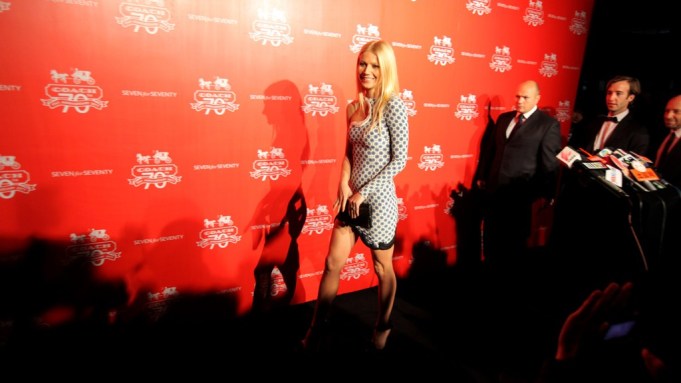 The Beijing party in the city’s hip 798 art zone may have been in honor of Coach’s 70th anniversary, but the real star of the show was Gwyneth Paltrow’s ability to belt out hits.

The party, which featured an Italian feast for several hundred guests, was held at the Iberia Center for Contemporary Arts, part of the city’s rapidly growing region for artists, designer boutiques and cafes.

Paltrow wore a one-shoulder, skintight minidress designed by Stella McCartney, and sat near one of China’s well-known celebrities, Bao Bao Wan, the jewelry designer and granddaughter of Wan Li, one of the country’s former vice premiers. Guests included several of the artists who created photographic displays for the Coach exhibit, including filmmaker Steven Sebring, best known for his documentary on rocker Patti Smith, “The Dream of Life.” For the Coach exhibit, Sebring said he shot his film of a young woman running through the streets of New York City with a large Coach bag flung over her shoulder on a 16-mm. camera in just three hours.

Sebring commented on the “energy” of Beijing but admitted he was put off by the air pollution. When he landed at the airport, he asked a woman accompanying him, “What is that smell?”

The dinner, created by chef and Paltrow friend Mario Batali — who was not in Beijing — included fried zucchini blossoms, butternut squash tortellini, short ribs in barolo, and a ricotta pudding cake.