Coach Gets Festive for the Holidays

Drew Barrymore, Camilla Belle and James Marsden were among the attendees who dusted off their dancing shoes for a casual house party. 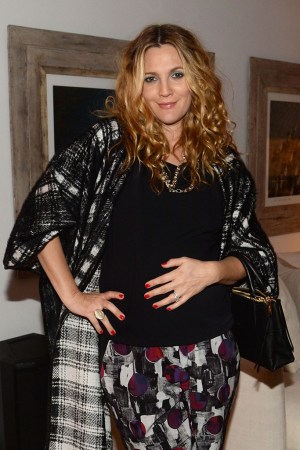 The invitation called for “dance party festive” attire, and guests at Coach’s holiday shindig on Tuesday night followed suit. Drew Barrymore, Camilla Belle and James Marsden were among the attendees who dusted off their dancing shoes for a casual house party at the Beverly Hills home of Ashlee Margolis and Dan Fishman.

“I thought, ‘Oh, a fun hipster party with old friends and a brand that I love, let’s do this,’” said Barrymore, clad in a cape from the brand. “Also, my husband got me this [Chanel] necklace and I don’t feel like I have very many opportunities to wear it because I’m always in sweatpants and no makeup. So I was like, ‘Great. I get to wear my husband’s necklace. I get to don a cape. And it’ll get me out of the house,’ which, when you’re pregnant…Man, you don’t leave the house much. I’m such a nester.”

The Flower Beauty creator and husband Will Kopelman made their way into the kitchen where Belle and Rashida Jones had also congregated to watch Animal chefs Jon Shook and Vinny Dotolo whip up sweet and savory pancakes of each guest’s choosing. Elsewhere, Michael B. Jordan hung out by the fire pit while Marsden chatted with friends on a corner couch by the pool. Guests Ahna O’Reilly, Nikki Reed, Cat Deeley, Adrian Grenier, Amy Smart, Busy Phillips, Sarah Chalke and Judy Greer sipped on Veuve Clicquot while nibbling at Coolhaus ice cream.

“I thought this was a birthday party,” shrugged O’Reilly. “I actually came with a card for Ashlee.”
“You thought it was my birthday?” laughed Margolis.

“Yeah,” said O’Reilly, as she pulled a card out of her purse. “I just thought it was sponsored by Coach.”

She wasn’t completely off, as attendees acted as veritable models for the brand. Deeley sported a pair of “super comfy” Coach pumps and said she’s been wearing them to shoot her new New York-based comedy “Deadbeat.” Was she comfortable enough to kick up her heels? “If you’re asking…I’ll be dancing,” she said.

As if on cue, Jones and her sister Kidada hit the dance floor while Mary J. Blige and De La Soul tunes played. Marsden was among the guests who lingered until close to midnight, an hour past the party’s official end.