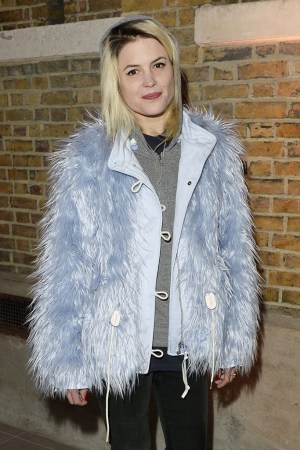 PUT ME IN COACH: Prints of adorable coat-wearing cartoon bears and blindfolded bunnies by artist Gary Baseman, who collaborated with Coach on its spring 2015 collection, lined the walls of the Sackler Gallery for the Serpentine’s annual Future Contemporaries fundraising party on Saturday night.

As L.A. indie rock group Warpaint performed a set as part of the Coach Backstage concert series, Jessica Stam, fresh from the Public School and DVF runways in New York, said she was in London to walk for Jonathan Saunders and Giles. “I am also presenting something at the Elle Style Awards on Tuesday, but I am not sure what it is yet. I guess I’ll just follow the teleprompter,” she admitted.

Socialite and The London Chatter blogger Kelly Eastwood told WWD about a new addiction – Dubsmash, an app that lets users record a video set to a famous song or soundbite, and share it. “My poor boyfriend is sick with flu at his safari camp, Sarara, in Kenya, so I have been haunting him all day with Disney Princess Dubsmash videos. I thought my Princess Jasmine was rather good, but he may never talk to me again.”

Across town, at the Mondrian Hotel’s rooftop bar, Gareth Pugh’s acolytes kept up a lively vigil as they waited for the designer, who was dining downstairs, to arrive following his 10-year anniversary show earlier in the evening.