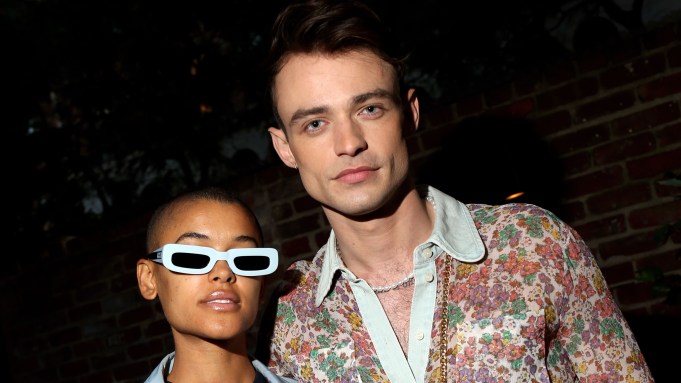 After the Coach show Friday evening, it was time for a toast. One unusual trend emerging from this pandemic fashion week is that suddenly VIP guests are on the early side at party attending — fashionably late seems to have gone out the window for now. That was certainly the case at The Orchard Townhouse, a Chelsea bar Coach took over for postshow drinks.

Walking in straight from the show and already the party was in full swing: Camila Morrone was perched in a cushioned window seat deep in conversation with Stella Maxwell, shy about the cocktail in her hand making it into any photos. Tommy Dorfman, who has been one of the most frequent front-row guests this week, was settled in, chatting with friends. “The White Lotus” costars Alexandra Daddario and Brittany O’Grady stuck close to one another. Jon Batiste slunk in and made a beeline for a booth with Chaka Khan, who went relatively unbothered as the party swirled around her. Cordae gave Ricky Thompson a first bump.

“Do you have anything with tequila, man?” Miles Chamley-Watson asked the bartender. “Oh, this is an open bar? In that case, tequila on the rocks.” He then looked around the party, where the crowd was grouped into pockets of side conversations. “Am I the only one drinking? Well, cheers to myself.”

The TikTok boys — Noah Beck, Blake Gray — rolled in together, and while they might reign supreme online, in person their arrival went relatively unnoticed.

Out through the back of the bar turned into a cool-kids hang. The “Gossip Girl” crew of Thomas Doherty and Jordan Alexander mingled about, already right at home in their roles of New York elite. “Tom!” Ross Butler shouted at Doherty, going in for a greeting. The Scottish actor is getting much more adjusted to being recognized these days.

“The demographic is usually, like, 17- to 25-year-old girls,” he said. “But sometimes I get boyfriends who come up and are like, ‘my girlfriend watches the show.’”

The rising fashionista cited Harry Styles and David Bowie as style icons (Styles surely was inspiration for the pearl necklace and platform shoes Doherty was wearing) and said his first fashion week has been nothing but fun so far.

“You are around the energy, it’s not so much just about the fashion,” he said. ”It’s a lot to do with people, and all walks of industries come in, there are singers and pop stars and actors and musicians and so that ensemble makes it cool.”

Coach executive creative director Stuart Vevers arrived through the back and stayed masked as he mingled with his guests. With a Met Ball looming, one had to marvel at his never-ending social pizzazz.