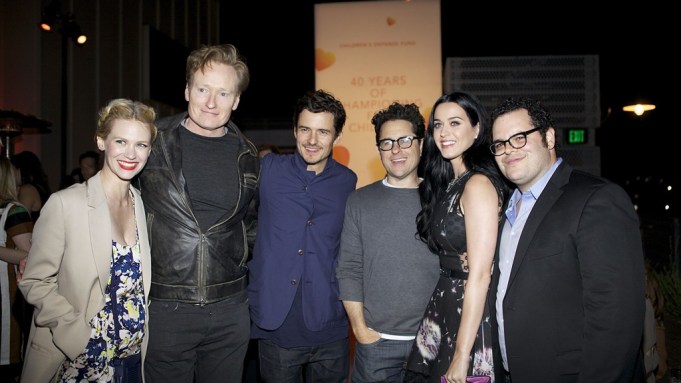 As the producer-director behind the “Star Trek” movie franchise and the next installment of “Star Wars,” J.J. Abrams gathered an interstellar group on the rooftop of his Santa Monica, Calif., production company Bad Robot for a Coach cocktail party and shopping event to benefit the Children’s Defense Fund on Wednesday. Cohosted by Abrams’ wife, Katie McGrath, and producing partner, Bryan Burk, the night attracted Trekkers like Chris Pine and Alice Eve, as well as friends Jon Favreau, Conan O’Brien, January Jones and Orlando Bloom.

“This must be one of the coolest places ever to work,” said Jennifer Morrison, looking out at the view. “It’s a creative, warm space, but it’s also big enough to throw a party.”

Stylist Johnny Wujek guest DJed, which brought out clients Katy Perry and Kate Mara. Dancing was kept to a minimum, but shopping was in full swing.

“You are in the midst of Legacy clutches!” announced Abrams, ever the eager sales clerk. (He said the brand donated $100,000 to the nonprofit, in addition to 100 percent of the evening’s proceeds.) “There are some wonderful totes and Legacy clutches, ladies and gentleman. It’ll fit everything — iPads, iPhones, a lot of things! Put the clutch in the tote and go home!”

It didn’t take much to convince Amy Smart. “I always like to shop for a cause. It’s good to vote with your dollars,” she said. Sophia Bush agreed, “I might be getting a lot of gifts here for people tonight.”