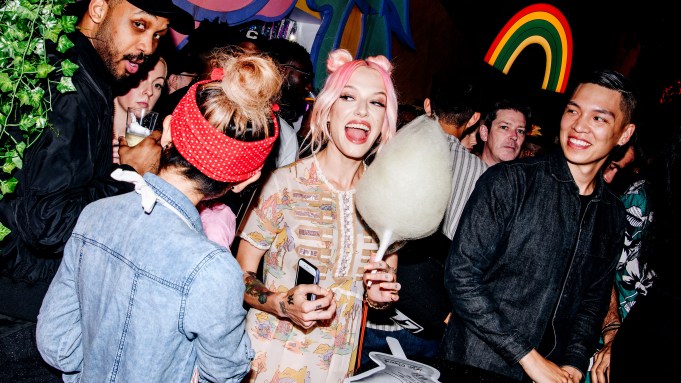 We’re all in need of a little guidance every once in a while — or at least that’s what Coach is banking on.

The company has launched Life Coach, an interactive pop-up in SoHo now open where guests are invited to engage with themes of “creativity and self-expression,” according to the company, through tarot, carnival games, live performances and art.

The first room was a blank canvas of white subway tiles, where supplies were doled out to guests in encouraged vandalism. While many took the opportunity for self-promotion of their own handles, others went with scrawled messages of “be here now,” “love yourself” and the occasional “f–k Trump,” clearly channeling Robert De Niro’s outburst at the Tony Awards.

From there, they moved into a room of carnival games complete with ski ball and cotton candy, where Smalls and Ne-Yo hovered for most of the night, before entering an enchanted forest complete with tarot readings.

Not to pass up the temptation, Vevers and his husband Benjamin Seidler ducked into one of the tents for a tarot reading.

“My reading gave me ammunition for adventurous projects coming up,” the Coach creative director said after the fact. “But fortune is best when you share it. It was fun to listen in on my husband’s reading, too.”

“Myself — cause I’m the one who teaches myself when I need to learn a lesson,” Vinaite said of hers. “I feel like you always have to be the one to lead your path because no one has lived it. It’s nice to coach yourself. I wouldn’t take advice from anyone who hasn’t accomplished exactly what I’m trying to. And it’s so many things that I don’t…you know what I mean? It would be hard to pinpoint a singular person.”

The actress, best known for “The Florida Project,” was fresh off a night at the CFDA Awards last week with winner Sander Lak of Sies Marjan.

“It was so exciting, he was so deserving of it; his clothes are so refreshing and I was so happy to be there with him to celebrate,” she said. “We had the best time, for real.”

Vinaite plans to spend the summer working, though she seems to have carved out some space for fashion parties in the mix.

“It’s going to be the best summer ever,” she said. “And my birthday was yesterday, so I’m still celebrating.”

Simmons, son of Joseph “Rev Run” Simmons of Run-DMC, was kitted out in Coach for the night.

“We went to the store and got to pick out what we wanted which was cool — I’m a Keith Haring fan so this was super sick to me,” Diggy Simmons said of his jacket of choice.

Simmons, who will be releasing a hip-hop album this fall, tends to gravitate toward “Fifties and Sixties vintage” clothes as of late.

“I watched a bunch of old mafia movies and I was like ‘This is cool.’ So I’ve been doing a lot of that this summer,” he said.

Out With a Bang: Inside the Tony Awards After Party at The Plaza