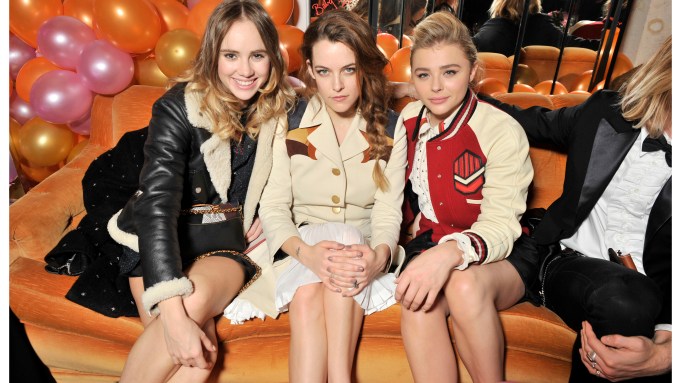 The event at the Hôtel Salomon de Rothschild was to celebrate the first flagship of the American accessories and fashion brand in Paris, which opened last fall at 372-374 Rue Saint-Honoré. (The party, originally scheduled for Nov. 19, was postponed following the terror attacks that hit Paris a week before.)

Coach creative director Stuart Vevers was living out his prom-night fantasy, which included table football, balloons galore, candy, high school memorabilia and — topping it all off – a live performance by Debbie Harry.

“It’s really where you want to have a prom – in a utopia, right?” mused Vevers, while leaning on a convertible parked in the private mansion’s garden and chatting with Edie Campbell. He joked that’s where the “bad kids” are.

Campbell recalled her equivalent of prom night: “It was in a pub. I wore jodhpurs — it was quite chic.”

“No — high-waisted and skintight,” she said, before clarifying that in the U.K. it’s not called a “prom.” “It’s called a ‘leaving party.’ They wave goodbye to you. They celebrate the fact that you’re leaving.”

Moretz, who stars in Coach’s spring 2016 campaign, said she’s to start filming “The Little Mermaid” in London. “I have to tie my feet together to train. I’m training with the Aqualillies — it’s a synchronized swimming team,” she said.

The actress is currently promoting “Neighbors 2” with costars Seth Rogen and Zac Efron. In it, she plays a head sorority girl.

“It was a lot of fun,” said Moretz, adding the film’s second installment is “way crazier” than the first.

“I was home-schooled, so this is my first prom,” revealed Keough, who is Elvis Presley’s granddaughter. She is about to start a new film in April.

Keough will also appear in the upcoming series “The Girlfriend Experience,” which was directed by Amy Seimetz and executive produced by Steven Soderbergh. It airs on the Starz cable network in April.

“I play an escort who’s in law school,” said Keough, who filmed in Toronto last year.

The English model and actress recalled her own prom night. “My outfit was understated, slightly cowgirly, not cheesy, more relaxed,” she said. “I am going on holiday next week, to the Amazon rainforest. I’ll wear very long sleeves [to prevent] mosquitoes bites.”

Simons never had a prom night either. “That’s why I am here,” said the designer with a laugh. “I am traveling a lot [to see] family. I just bought a puppy, a beauceron. She’s called Luka, after the Suzanne Vega song.”

A self-proclaimed Harry fan, couldn’t he have named his dog after one of her songs instead?

“That would have been a good one, as well…Denis,” he said.

Atlanta de Cadenet said she has a small part in “Elvis and Nixon,” featuring Johnny Knoxville and Michael Shannon, which was shot in New Orleans last year. “I play a stewardess, with a flight attendant’s outfit. It takes place in the Seventies,” she said. “I’m trying to put some energy into acting this year.”