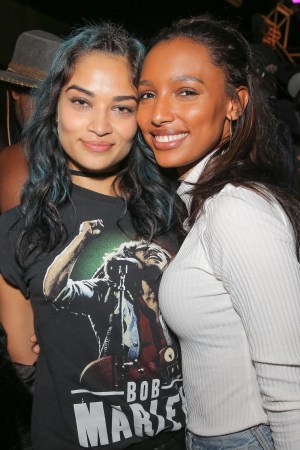 Not even bumper-to-bumper traffic and road closures could prevent motivated desert revelers from raging long after Ice Cube and Guns N’ Roses closed out night two of the Coachella Valley Arts and Music Festival on Saturday. The Uber system crashed and burned, leaving partygoers stranded in the middle of the desert at Neon Carnival, held in a hangar at the Desert Resorts Airport in Thermal, Calif., for the seventh year in a row. Those without access to private planes or helicopters were forced to wait in an Uber holding area where tempers ran hot and transportation mixups prevailed. But debauchery-seeking celebrities, including Taylor Swift, Leonardo DiCaprio and Rihanna, managed to party-hop amid the cluster.

For those inside, love was in the air — at least for the night. A Tinder-themed “Matchmaker” ride for two-somes underlined the hookup-heavy vibe inside the carnival, complete with bumper cars, a Ferris wheel, ball toss games and free-flowing tequila.

DiCaprio, trying to cover up in sunglasses and a baseball cap, kept the gossipers engaged after a whispering session with rumored paramour Rihanna, who was hard to miss in a sparkly choker and oversize yellow-rimmed sunglasses. Meanwhile, Swift, sporting her new platinum do, trademark red lips, and metallic Converse, rolled up with her oft-Instagrammed girl squad, including Kennedy Raye and Karlie Kloss, one of the few who could pull off a pleather burgundy bodysuit and floor-grazing striped cardigan. Harder to pull off: The cloud-adorned, cutout onesie and two pink buns donned by Katy Perry, who spent the majority of the weekend cozying up to Orlando Bloom.