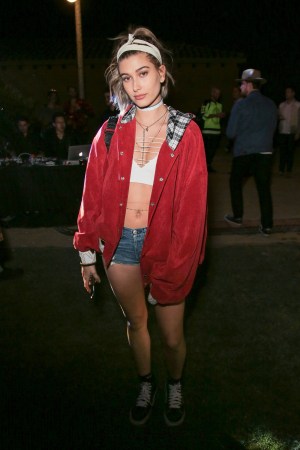 Friday, the first night of Coachella parties, got off to a late start – literally – with two offsite events, Calvin Klein’s Desert Warehouse DJ fest and Nylon’s Midnight Garden Party, that began after the festival headliners Ellie Goulding and LCD Soundsystem finished their sets. In an effort to keep crashers at bay, both events staged separate check-in areas and then transported guests to the actual party sites.

In its sophomore outing, Nylon’s bash (which last year drew guests Justin Bieber and Katy Perry and performances by The Misshapes, The Dolls, Mia Moretti, and Chelsea Leyland) took place at a sprawling estate near the festival grounds in Indio, Calif. Among the famous folk who ventured out were Scott Eastwood, Leonardo DiCaprio (who clearly is making the rounds post-Oscarwin), Joe Jonas and his band DNCE, Owen Wilson, Jesse Metcalfe, Cara Santana and Cody Simpson and Peyton and Spencer List.

Also in the mix were models Hailey Baldwin, Matthew Noszka, Jordan Barrett, Margaux Brooke and Brittany “McKey” Sullivan, most of whom hung out in VIP cabanas sponsored by the soon-to-open Dream Hollywood hotel, complete with “Do Not Disturb” signs (which didn’t stop non-famous guests from taking photos, as evidenced by the number of social media hits the next morning).

Also making the rounds were Kristen Stewart and her DJ girlfriend Soko, who was on duty that night (the pair were staying at a resort in Palm Springs along with Jonas and a handful of other A-Listers). Another famous DJ, Skrillex, later hopped on the decks for a surprise set to close down the night well after 3 a.m.